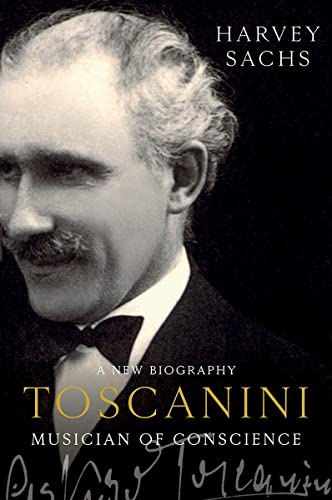 It may be difficult to imagine today, but Arturo Toscanini -- recognized widely as the most celebrated conductor of the twentieth century -- was once one of the most famous people in the world. Like Einstein in science or Picasso in art, Toscanini (1867-1957) transcended his own field, becoming a figure of such renown that it was often impossible not to see some mention of the maestro in the daily headlines. Acclaimed music historian Harvey Sachs has long been fascinated with Toscanini's extraordinary story. Drawn not only to his illustrious sixty-eight-year career but also to his countless expressions of political courage in an age of tyrants, and to a private existence torn between love of family and erotic restlessness, Sachs produced a biography of Toscanini in 1978. Yet as archives continued to open and Sachs was able to interview an ever-expanding list of relatives and associates, he came to realize that this remarkable life demanded a completely new work, and the result is Toscanini -- an utterly absorbing story of a man who was incapable of separating his spectacular career from the call of his conscience. Famed for his fierce dedication but also for his explosive temper, Toscanini conducted the world premieres of many Italian operas, including Pagliacci, La Boheme, and Turandot, as well as the Italian premieres of works by Wagner, Brahms, Tchaikovsky, and Debussy. In time, as Sachs chronicles, he would dominate not only La Scala in his native Italy but also the Metropolitan Opera, the New York Philharmonic, and the NBC Symphony Orchestra. He also collaborated with dozens of star singers, among them Enrico Caruso and Feodor Chaliapin, as well as the great sopranos Rosina Storchio, Geraldine Farrar, and Lotte Lehmann, with whom he had affairs. While this consuming passion constantly blurred the distinction between professional and personal, it did forge within him a steadfast opposition to totalitarianism and a personal bravery that would make him a model for artists of conscience. As early as 1922, Toscanini refused to allow his La Scala orchestra to play the Fascist anthem, "Giovinezza," even when threatened by Mussolini's goons. And when tens of thousands of desperate Jewish refugees poured into Palestine in the late 1930s, he journeyed there at his own expense to establish an orchestra comprised of refugee musicians, and his travels were followed like that of a king. Thanks to unprecedented access to family archives, Toscanini becomes not only the definitive biography of the conductor, but a work that soars in its exploration of musical genius and moral conscience, taking its place among the great musical biographies of our time.… (more)

The New York Review of Books
Sachs seems to know everything about his subject and his times, and there are marvelous, learned asides such as “Nietzsche, who had been living in Turin, would almost certainly have heard Toscanini conduct Carmen there in the spring of 1889 had he not lost his sanity and collapsed on the city’s streets the previous January.” And there is never any doubt that he has chased his stories as far as they will lead. “The [1906–1907 La Scala] season was to have closed with the local premiere of Massenet’s recent Le Jongleur de Notre-Dame; when this project fell through, for reasons no longer known, a remounting of Cavalleria Rusticana was scheduled in its stead.” “For reasons no longer known”—we can be sure that Sachs has looked for them.

LibraryThing member vlodko62
I listened to this as an audiobook. All 40 1/2 hours of it. I seldom make it through audiobooks of that length, and I’ll admit I had put it down at one point. But I came back to it and persevered - and my perseverance was richly rewarded!

A masterful biography, it captures the atmosphere of musical life from the latter part of the 19th through the first half of the 20th Century. All of that shown on the backdrop of the history (writ large) that he lived through: two world wars, Mussolini, Hitler, Toscanini’s own anti fascist stance, which ultimately led to his flight from Italy and years of exile.

If you are a music lover, or interested in music history, or just like well-written and well-researched biographies, this book is for you.… (more)