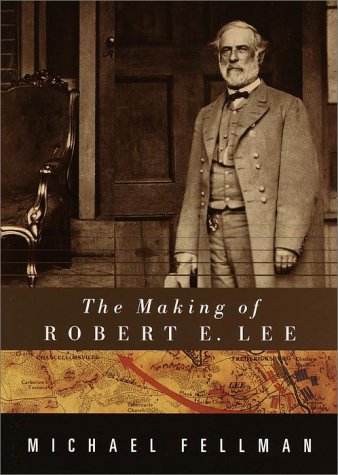 The Making of Robert E. Lee

Perhaps no other American historical figure is as shrouded in legend as General Robert E. Lee. Long extolled as the perfect gentleman as well as the consummate military commander, Lee—known as the Marble Man—has been venerated more than understood. During his lifetime, he contributed to this picture through the austerity and rigid control he tried to impose on himself. The Making of Robert E. Lee reveals the flesh-and-blood Lee—not to expose him but to better understand a man who was perhaps the most fervent practitioner of the Southern code of conduct, behind which he camouflaged much of his character.          With unprecedented insight into Robert E. Lee's personal and public lives, Michael Fellman humanizes this one-dimensional icon, placing him within history rather than above it. With both detachment and compassion, Fellman deftly probes beneath the surface to show Lee as a deeply conflicted man, one with sometimes surprising views on sexuality, family, religion, and politics, as well as military practice. This realistic portrayal situates Lee firmly in the contexts of his time, place, class, gender, and race.                  Although Lee tried to be a virtuous, even perfect man, he often flirted extravagantly—and perhaps did more—with women other than his wife. While he strove to be a kind and honest leader, he was extremely distant from and controlling of both his sons and the soldiers in his Civil War army. With his deeply ingrained habits of command, Lee the aristocratic disciplinarian looked down upon the white lower orders as he did upon slaves.          After a distinguished if conventional career in the peacetime American army, Lee chose to join the Confederate cause on account of his unquestioning identification with the values and interests of the Virginia slaveholding class. Something of a failure during the first year of combat, Lee was thrust into command at a crucial juncture in the war, just as the Union army approached Richmond, the Confederate capital. Fellman argues that "the Civil War rescued Robert E. Lee from marginality and obscurity."          No general proved more audacious and tenacious than Lee, and none had a greater passion for battle. For a year, almost without exception, an increasingly confident Lee guided a seemingly invincible army, winning great victories at high costs. Finally overreaching the capabilities of his troops, Lee led them into crushing defeat at Gettysburg, after which his customary humility returned.          Paradoxically, even though war ultimately reinforced Lee's deep pessimism in the face of Fate, afterward he became a conscious inspiration and adviser to elite whites who sought to destroy Reconstruction and keep blacks at the bottom of the social order. he became a spokesman as well as a rallying point for those postwar Southern nationalists who sought, with success, to maintain and strengthen white supremacy.          Fellman's study does far more than any previous book both to uncover the intelligent, ambitious, and often troubled man behind the legend and to explore his life within the social, cultural, and political contexts of the mid-nineteenth-century South.… (more)

LibraryThing member Muscogulus
Robert E. Lee is the most iconic figure from the American Civil War. Known during his youth at West Point as “the marble man,” Lee was celebrated after the war, even in the northern states, as an icon of both chivalry and Christian virtue. His portrait has looked down from a place of honor on the inmates of countless prep schools and military academies.

Modern biographical studies occur in the long shadow of Douglas Southall Freeman’s multi-volume life of Lee. Revisionist forays into Lee biography have mostly challenged Lee’s reputation as a military genius, without usually delving into his presumed noble character, or his reputation as a Confederate leader who ultimately transcended sectionalism. In the twenty-first century authors continue to turn out unabashedly worshipful titles such as Duty Faithfully Performed, Duty Most Sublime, and The Genius of Robert E. Lee.

Michael Fellman’s The Making of Robert E. Lee is less a narrative of Lee’s life than an essay on his character. Through a close, psychologically informed reading of Lee’s private correspondence and public utterances, Fellman proposes that Lee’s stoic character was the result of unceasing internal struggle to embody the profoundly conservative values of the Virginia gentry.

The son of a heroic but disgraced father, Lee was (as Fellman convincingly argues) destined for obscurity himself until the Civil War summoned him to duty. Success on the battlefield provided an outlet for his repressed drives in the form of his famed “audacity” and contempt for the enemy. Humbled at Gettysburg, Lee did not, in Fellman’s finding, accept the blame for the defeat, but pinned it on his generals while holding the army and himself blameless. Far from being a focal point for reconciliation between North and South, Lee was instrumental, in Fellman’s view, in the establishment of “Lost Cause” ideology. After the Confederate defeat, Lee took his stand once again on the conservative values of racial paternalism, southern sectionalism, and stoic self-control — an ideology he passed on as an educator and, after his death, as an idealized memory of southern gentility.

Fellman’s study of the life of Lee is distinguished by its focus on private correspondence before and after the war, rather than on military affairs. The author’s principal concern is with Lee’s roles as husband, father, slaveowner, school administrator, and public figure, each of which sheds light on his performance as commander of the Army of Northern Virginia and bastion of the Confederacy.

This is not a definitive book, and it certainly will not end the spate of books on Robert E. Lee. Some of Fellman’s speculations, e.g. on Lee’s epistolary dalliances with young women, are plausible even if they must remain unproven in detail. At a minimum, they serve as a useful counterpoint to traditional reverence for Lee. But what is most valuable about the book is that it uses a skillful and fair reading of Lee’s own correspondence to provide new insight on the perennial topic of Lee’s character.… (more)

Lee's lieutenants, a study in command: Manassas to Malvern Hill by Douglas Southall Freeman
Citizen Sherman:: A Life of William Tecumseh Sherman (Modern War Studies) by Michael Fellman
A battle from the start : the life of Nathan Bedford Forrest by Brian Steel Wills
Lee's lieutenants, a study in command; Gettysburg to Appomattox by Douglas Southall Freeman