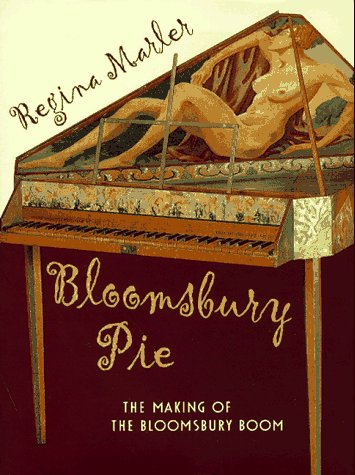 Bloomsbury Pie: The Making of the Bloomsbury Boom

Literature, (shelve in Lit under "B" for Bloomsbury)

"Celebrated and maligned with equal vigor, the Bloomsbury Group is the best-documented artistic coterie in twentieth-century literature. The novelists Virginia Woolf and E. M. Forster, the artists Roger Fry, Duncan Grant, and Vanessa Bell, and the economist John Maynard Keynes were among this charmed circle that emerged in London before the First World War and came to exercise a complex, lingering influence on English art and letters. Theirs was a world of great talent - even genius - sexual intrigue, and gossip; they cultivated an atmosphere in which it was possible to say anything, do anything. Their peak of influence in the 1920s was followed by forty years of sustained sidelong derogation, and occasional frontal attack, from such famously hostile critics as D. H. Lawrence and Wyndham Lewis, until, in the 1960s, the idea of Bloomsbury exploded in the public imagination, transforming the Group into an almost mass-market attraction." "Not in their darkest nightmares could Bloomsbury's contemporary detractors have imagined that Charleston Farmhouse, where Vanessa Bell and Duncan Grant once lived and painted, would eventually attract some 15,000 visitors each year, or that a high-profile film, Carrington, would be based on Lytton Strachey's largely platonic love affair with an obscure artist on the fringes of the hallowed Group. Bloomsbury Pie examines the persistent allure of Bloomsbury - a fascination driven by nostalgia, adoration, and antipathy - and tracks the resurgence of interest in the Group, from a handful of biographies in the 1960s through the feminist discovery of Virginia Woolf in the 1970s and the enshrinement of the Bloomsberries as cultural icons in the 1980s and 1990s. Drawing on a wealth of material generated by this revival, Regina Marler chronicles the story of the Bloomsbury boom - its scholars, collectors, and fanatics - and explores the industry it has spawned among writers, publishers, and art dealers. In the process she creates an impressive social history of a tenacious and unwieldy cultural phenomenon."--BOOK JACKET.Title Summary field provided by Blackwell North America, Inc. All Rights Reserved… (more)