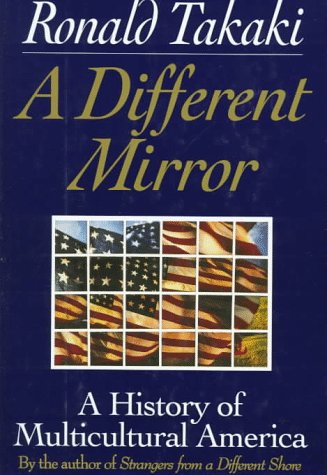 A Different Mirror: A History of Multicultural America

A dramatic new retelling of our nation's past. Beginning with the colonization of the New World, it recounts the history of America in the voice of the non-Anglo peoples of the United States--Native Americans, African Americans, Jews, Irish Americans, Asian Americans, Latinos, and others--groups who helped create this country's rich mosaic culture. Now, Ronald Takaki has revised his landmark work and made it even more relevant and important. Among the new additions to the book are: the role of black soldiers in preserving the Union; the history of Chinese Americans from 1900-1941; an investigation into the hot-button issue of "illegal" immigrants from Mexico; and a look at the sudden visibility of Muslim refugees from Afghanistan. This new edition grapples with the raw truth of American history and examines the ultimate question of what it means to be an American.--From publisher description.… (more)

LibraryThing member a211423
One of the best books on multi-culturism in America I have read. Mr. Takaki is an excellent writer and uses a comparative approach to understand race and culture through the stories of immigrants.
4 more
LibraryThing member CassandraStrand
Takaki does an absolutely phenomenal job in exploring the history of multicultural America highlighting the often ignored and left out parts of history that showcase just how badly the "white european" treated anyone else. It's a great introduction to real American history not the whitewashed versions heard in grade school. It covers nearly every "race" and ethnicity except the Arabs which is why I can only give it 4 stars. By leaving out Arabs it's left out the immigrants from an entire region of the earth. Otherwise the book covers pretty much everyone. Takaki's writing style is fluid and easy to follow making it easy to read an understand yet contains enough depth that it stimulates thought and discussion.… (more)
LibraryThing member ElOsoBlanco
Such an informative book!
LibraryThing member NCFChampaign
I found this book a profoundly moving, profoundly sobering look at the history of our country. It is also a book I couldn't recommend more enthusiastically. In my opinion it is a "must read." I first came across the title on a book table set up by two women who came to NCF to talk about Reba Place's experience with racial reconciliation. I carried the title around with me for a year or two and finally checked it out at the public library. I don't know if I've ever been impacted so strongly by a book before. Takaki, a third-generation American (as is my mother) covers American history from the perspective of some of the various minorities that have made America their home, and one that is indigenous. He covers African Americans, Irish Americans, Mexican Americans, Chinese Americans, Native Americans, Japanese Americans, and Jewish Americans from the beginnings of our country to the early 1990s. He evenhandedly paints a picture of the reality of American experience for these different groups. He describes the difficulties they had both on a societal level and on an official government policy level. For those who shudder at the thought of reading through a dry history, never fear. This book is most readable. In fact it is downright engaging. Even eloquent. It is heart-changing. Read it.
(Carolyn Vance)… (more)
LibraryThing member b.masonjudy
Takaki's sweeping text is an excellent introduction to the history of people in the United States who have been oppressed and exploited by the dominant White culture. Really, what he writes in this book is a robust, and concentrated narrative of history that does not shy away from real hurt, violence and affords the reader many opportunities to reflect on how racist and fearful policies of the past are recapitulated in a modern context. While Takaki goes into the violent and painful legacy of violence in the United States he also offers his own story, and a tangible vision of hope for a pluralistic multi-cultural society where all people are treated with dignity and respect.… (more)
Fewer

A Different Mirror: A History of Multicultural America by Ronald Takaki (Paperback)