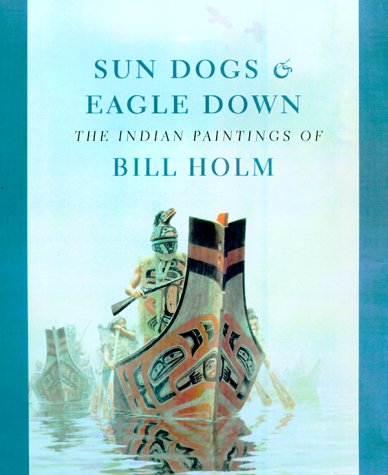 Sun Dogs and Eagle Down: The Indian Paintings of Bill Holm (Naomi B. Pascal Editor's Endowment)

Bill Holm is internationally recognized as a leading expert on Northwest Coast, Plateau, and Plains Indian art. As curator emeritus of Native American art at the Burke Museum, professor emeritus of art history at the University of Washington, and author of numerous books and articles, including the classic work Northwest Coast Indian Art: An Analysis of Form, he has established an unparalleled reputation as a scholar, teacher, and craftsman. For many years he has also produced detailed paintings that draw on his ethnographic expertise to recreate the settings in which the old Native American art objects were used. This eagerly awaited book makes available for the first time 49 full-color reproductions of Bill Holm's paintings of traditional Indian scenes, produced from the 1950s to the present. Also included are some of the small watercolors and drawings Holm has made on envelopes, and several of his three-dimensional pieces, some of which were created in part as props for the paintings. In addition to being visually compelling, the pictures provide a wealth of ethnographic detail, from the eagle down scattered by the Kwakiutl to welcome important guests, to the sun dogs -- bright spots near the horizon that mimic the sun -- featured in myths from many northern tribes. A lengthy descriptive caption by the artist accompanies each painting. Steven Brown's essay offers a rich balance of scholarly information, sensitive critical analysis of individual works, and warmly personal anecdotes. He positions Holm's scholarship in terms of his development as a fine artist, interweaving Holm's curatorial activities and art historical writings with his corpus of paintings. Lloyd Averill's concise, extensively researched chronology is packed with useful and interesting information. He provides in addition a complete bibliography of works by and about Bill Holm. His chronology includes Holm's long relationship with the Kwakwaka'wakw and with coastal Natives, his association with Bill Reid and the "Northwest Coast renaissance," and his involvement with the restoration and reissuing of the 1914 Edward Curtis movie, now titled In the Land of the War Canoes.… (more)