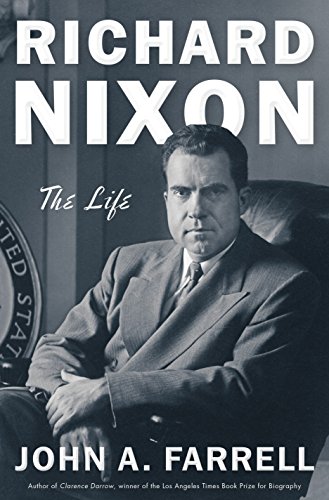 by John A. Farrell

"At the end of World War II, navy lieutenant "Nick" Nixon returned from the Pacific and set his cap at Congress, an idealistic dreamer seeking to build a better world. Yet amid the turns of that now-legendary 1946 campaign, Nixon's finer attributes gave way to unapologetic ruthlessness. The story of that transformation is the stunning overture to John A. Farrell's magisterial biography of the president who came to embody postwar American resentment and division. Within four years of his first victory, Nixon was a U.S. senator; in six, the vice president of the United States of America. "Few came so far, so fast, and so alone," Farrell writes. Nixon's sins as a candidate were legion; and in one unlawful secret plot, as Farrell reveals here, Nixon acted to prolong the Vietnam War for his own political purposes. Finally elected president in 1969, Nixon packed his staff with bright young men who devised forward-thinking reforms addressing health care, welfare, civil rights, and protection of the environment. It was a fine legacy, but Nixon cared little for it. He aspired to make his mark on the world stage instead, and his 1972 opening to China was the first great crack in the Cold War. Nixon had another legacy, too: an America divided and polarized. He was elected to end the war in Vietnam, but his bombing of Cambodia and Laos enraged the antiwar movement. It was Nixon who launched the McCarthy era, who played white against black with a "southern strategy," and who spurred the Silent Majority to despise and distrust the country's elites. Ever insecure and increasingly paranoid, he persuaded Americans to gnaw, as he did, on grievances--and to look at one another as enemies. Finally, in August 1974, after two years of the mesmerizing intrigue and scandal of Watergate, Nixon became the only president to resign in disgrace. This is a gripping and unsparing portrayal of our darkest president. Meticulously researched, brilliantly crafted, and offering fresh revelations, it will be hailed as a masterwork."--Jacket.… (more)

LibraryThing member Schmerguls
5508. Richard Nixon The Life, by John A. Farrell (read 22 Oct 2017) Back in July of 1995 I read Stephen Ambrose's three volume life o Nixon and on 21 Jan 2016 I read Evan Thomas' biography of Nixon. This biography by John A. Farrell was published this year and is teeming with original research and I found it completely fascinating. It is certainly even-handed and at times I was viewing it as over-friendly to Nixon, but I think it adequately shows the near-fatal flaws in NIxon while giving him credit for what good things he did Farrell had the benefit of tapes not available to Ambrose and so this biography probably somewhat dates prior biographies of Nixon. The thoroughness of the research put into this book is very impressive and no one interested in Nixon's career can fail to be impressed by the book. The account of the events leading up to Nixon's fall is mind-boggling and demonstrates how right we were to be ready to convict him for the evil he fostered… (more)
5 more
LibraryThing member michaelbartley
after reading this excellent bio I ended up having respect for nixon. he did do a lot of good things. however his very dark side destroyed him.
LibraryThing member annbury
A great book. Farrell has done a magnificent job of relating Nixon to his two
parents, the Quaker mother, Hannah, and the rogue father, Frank. It is mostlly as a result of these two that he is so screwed up/. Farrell praises him when he deserves it, mostly his friendship with many blacks in the 50s
and rips him when he screws up. especially on the 68 election. where Dick told the South Vietnamese not to join the Peace talks in Paris when we had only lost 30,000 soldiers. Very matter of fact. The author has done his homework, reading all of the Haldeman notes which corroborated the 68 story.… (more)
LibraryThing member jonfaith
The president was “a gut fighter….His first reaction was to fight back…to get even.”

Amongst my earliest memories during the early/mid 1970s was the ubiquity of the word Watergate. Somehow I imagined it was related to the games of dominos that my grandparents played with their friends. The designs created during the game evoked plumbing -- I was too young to grasp that Plumber was another timely designation.

Perhaps it is hubris, whatever the motivation--it is daunting to attempt to encapsulate a man's life in 540 pages, especially as one as involved Richard M. Nixon. Beginning in WWII and then retracing back to Nixon's birth and ancestors, a conflicted portrait emerges, fuelled by the dueling temperaments of his parents. Nixon--ever insecure--always felt his success while girded by hard work was purely coincidental. Dumb luck.

“Nixon “didn’t give a damn” about the finer points of domestic policy, said aide Tom Huston. “All he wanted to do was to keep the sharks away.” And so many progressive measures, crafted with the help of his administration, made their way to Nixon’s desk, where he acquiesced, signed his name, and took his just share of the credit.

The foreign policy aspects of the book were riveting, domestic less so. It is important to recognize that during the 1950s Nixon was a much more vocal supporter of civil rights than Eisenhower, Johnson or Kennedy. Nixon felt betrayed then when African-Americans voted for Kennedy in the 1960 election.

Nixon's entreaties with the Soviets and the Chinese are simply breathtaking. His approach to strife in the subcontinent is abominable. As was the stewardship of Vietnam -- though who amongst his storied predecessors handled it better?

A very human biography of a most human president.… (more)
LibraryThing member wwj
Excellent, shorter than Ambrose but at least as well written. Can't imagine what RN would have done if he had picked up one of those girls, but per Farrell, he did try from time to time.
LibraryThing member kaulsu
This book presents me with the dilemma I often face when rating biographies: how do I balance the quality of writing (Farrell writes quite nicely) with the depth of the necessary research (again, Farrell has done a good job), along with my overall feelings about the subject?

I often found myself feeling very sympathetic to the wasted raw intelligence that was young Richard. But when that was compared to his complete lack of morals as a mature politician? Bah. I am quite glad his Quaker mother didn’t live to see how degraded he became.

And do, I will cop out and rate it 3.5 stars. But definitely worth the read.… (more)
Fewer

Nixon and Kissinger : partners in power by Robert Dallek
The arrogance of power : the secret world of Richard Nixon by Anthony Summers
Shadow : five presidents and the legacy of Watergate by Bob Woodward
Nixonland : the rise of a president and the fracturing of America by Rick Perlstein
The Age of Eisenhower by William I. Hitchcock
9 more
Grant by Ron Chernow
Means of ascent by Robert A. Caro
The years of Lyndon Johnson. [Volume 3], Master of the senate by Robert A. Caro
Traitor to His Class : The Privileged Life and Radical Presidency of Franklin Delano Roosevelt by H. W. Brands
Washington : a life by Ron Chernow
Thomas Jefferson : The Art of Power by Jon Meacham
The bully pulpit : Theodore Roosevelt, William Howard Taft, and the golden age of journalism by Doris Kearns Goodwin
The Haldeman diaries : inside the Nixon White House by H. R. Haldeman
American Ulysses: A Life of Ulysses S. Grant by Ronald C. White
Fewer