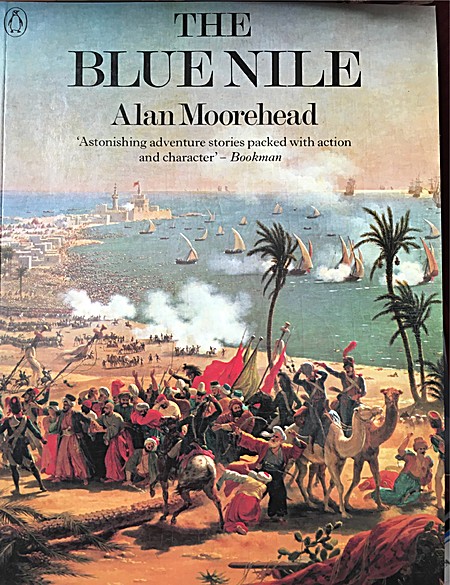 An account of the course of the Blue Nile from the Ethiopian Highlands, through the Sudan and Egupt to the sea. The book contains an historical narrative which starts in the eighteenth century and ends in 1869. The period was dominated by four men: James Bruce, the Scot who journeyed to the supposed source of the Blue Nile, and stayed in warring Ethiopia; Napoleon who, needing military glory to further his political ambitions, led a brilliantly conceived expedition to Egypt; Mohammed Ali, the Turkish viceroy, who sent his son to conquer the Sudan in a ruthless quest for gold and slaves; and Emporer Theodore of Ethiopia, a tyrant who held British subjects captive.

United Services Org
This book is infused with the tribal and religious cultures of the region, cultures which persist to this day. It is very helpful in understanding the nature of the conflicts in which our forces in the region are currently engaged

LibraryThing member bookwoman247
This book is a history of the Western exploration of Northeast Africa and Egypt. I have not read the companion volume, The White Nile.

Having been written in 1962, some dated attitudes were apparent, but overall, it was very interesting and informative. I'm glad I read it. I learned of edplorers I'd not heard of before, and even though I'd known that Napoleon had occupied Egypt for a while, I'd never known the details, and found them fascinating.… (more)
4 more
LibraryThing member santhony
I have read a lot of history on ancient Egypt and was passingly familiar with Napoleon's conquest of Egypt, however, I had absolutely no background on other aspects of 19th century Egypt and neighboring Sudan and Ethiopia.

This book was extremely enlightening with respect to such subjects as Mamaluke rule of Egypt prior to Napoleon's arrival and the subsequent reign of Muhammad Ali. However, by far the most interesting and educational part of the book was the last half which dealt primarily with the reign of Theodore, Emperor of Ethiopia and the British invasion to secure the release of European hostages held by Theodore. Prior to reading this book, I'd never heard of Theodore nor the British invasion of Ethiopia.

Blue Nile is a companion piece to White Nile, the Blue Nile being the Nile tributary which feeds into the river at Khartoum, Sudan having flowed from its source in the Ethiopian highlands. Moorehead does a very good job in describing the various expeditions which sought the source of the Blue Nile as well as the political and social anarchy endemic to the region.… (more)
LibraryThing member DinadansFriend
The exploration of the Blue Nile, the one that runs down from Ethiopia, is the topic of this well-written account of European exploration. from James Bruce to Kitchener at Khartoumn the story is well told.
Read twice.
LibraryThing member theonearmedcrab
“The Blue Nile” is the subject of a book written by Alan Moorehead in 1962. In fact, the book only briefly explores the river from Lake Tana to Khartoum, and down to the Mediterranean, recollecting the journey of James Bruce, who claimed – wrongly – to be the first European to see the source of the Nile. Most of the book, however, is taken up by narrating the efforts of three colonial powers: the French invading Egypt, the Ottoman Turks in Sudan, and a British expedition in Ethiopia. A really nice, and very readable book, well written, entertaining and informative, and companion to The White Nile (which I hope to acquire, too, once back in The Netherlands)… (more)
LibraryThing member kaitanya64
Along with "The White Nile," this is a great general introduction to a region and historical period that doesn't get the attention it deserves.
Fewer

The scramble for Africa : white man's conquest of the dark continent from 1876-1912 by Thomas Pakenham
The discovery of the Nile by Gianni Guadalupi
Cooper's Creek by Alan Moorehead
Stanley : the impossible life of Africa's greatest explorer by Tim Jeal
The Fatal Shore, A History of the Transportation of Convicts to Australia, 1787-1868 by Robert Hughes
9 more
To the heart of the Nile : Lady Florence Baker and the exploration of Central Africa by Pat Shipman
Captain Sir Richard Francis Burton : the secret agent who made the pilgrimage to Mecca, discovered the Kama Sutra, and brought the Arabian nights to the West by Edward Rice
A rage to live : a biography of Richard and Isabel Burton by Mary S. Lovell
Tournament of shadows : the great game and race for empire in Central Asia by Karl Ernest Meyer
Letters from Egypt: A Journey on the Nile, 1849-50 by Florence Nightingale
Dark safari : the life behind the legend of Henry Morton Stanley by John Bierman
The march of folly : from Troy to Vietnam by Barbara Wertheim Tuchman
The great game : the struggle for empire in central Asia by Peter Hopkirk
Seven pillars of wisdom : a triumph by T. E. Lawrence
Fewer