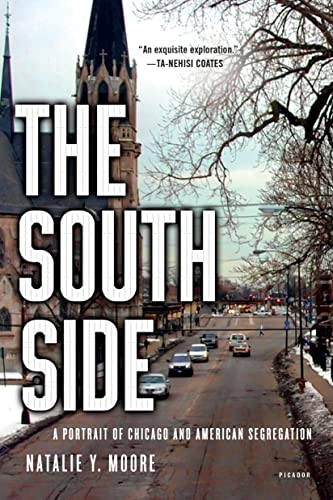 The South Side: A Portrait of Chicago and American Segregation

A lyrical, intelligent, authentic and necessary look at the intersection of race and class in Chicago, a Great American City.Mayors Richard M. Daley and Rahm Emanuel have touted Chicago as a "world-class city." The skyscrapers kissing the clouds, the billion-dollar Millennium Park, Michelin-rated restaurants, pristine lake views, fabulous shopping, vibrant theater scene, downtown flower beds and stellar architecture tell one story. Yet swept under the rug is another story: the stench of segregation that permeates and compromises Chicago. Though other cities - including Cleveland, Los Angeles, and Baltimore - can fight over that mantle, it's clear that segregation defines Chicago. And unlike many other major U.S. cities, no particular race dominates; Chicago is divided equally into black, white and Latino, each group clustered in its various turfs.In this intelligent and highly important narrative, Chicago native Natalie Moore shines a light on contemporary segregation in the city's South Side; her reported essays showcase the lives of these communities through the stories of her family and the people who reside there. The South Side highlights the impact of Chicago's historic segregation - and the ongoing policies that keep the system intact.… (more)

LibraryThing member DavidWineberg
In The South Side, local resident Natalie Moore weaves three themes into a long taut braid. There are her memoirs of growing up in south side Chicago, garlanded by its history and characters. There is the socioeconomic backdrop which altered that history and twisted it into less than it could have been and still could be. And there is the racism, overt, underlying and institutional that tortures countless lives. This is a worldwide phenomenon of course, but it is worthwhile to examine it in real terms in America’s Second City, which is mired in it, mostly thanks to machine local government.

Moore devotes chapters to housing, schools and food, pointing out the overt, the underlying and the institutional racism they incorporate. Her own experience is straight middle class, largely free of racist incidents and overt prejudice. Nonetheless, she has developed into a thoughtful, perceptive and in her words “uppity negress,” which is really fundamental to telling this story properly. The book is not scientific, prescriptive or complete; it is personal and selective.

The South Side ends on several positive notes, as barriers appear to be falling. Blacks and whites are mixing, housing is opening up some, and attitudes are slowly changing as integration and multiculturalism become assets rather than taboos. As one interviewee put it – segregation isn’t the problem; the diversion of resources is the problem. Blacks need not be desegregated to thrive; they need to stand up to whites to get access to the resources they have an equal say in and right to.

Ghetto: The Invention of a Place, the History of an Idea by Mitchell Duneier
Between the world and me by Ta-Nehisi Coates
The Warmth of Other Suns: The Epic Story of America's Great Migration by Isabel Wilkerson