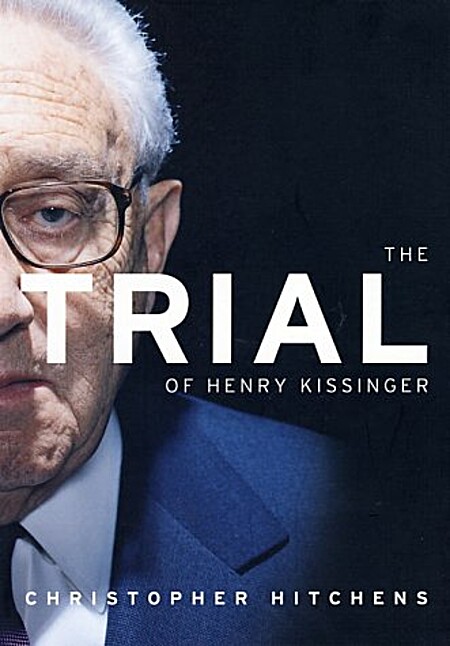 The Trial of Henry Kissinger

With the detention of Augusto Pinochet, and intense international pressure for the arrest of Slobodan Milosovic, the possibility of international law acting against tyrants around the world is emerging as a reality. In this incendiary book, Hitchens takes the floor as prosecuting counsel and mounts a devastating indictment of a man whose ambitions and ruthlessness have directly resulted in both individual murders and widespread, indiscriminate slaughter. He investigates and reveals Kissingers' involvement in: the deliberate mass killings of civilian populations in Indochina; the deliberate collusion in mass murder and assassination in Bangladesh; the personal suborning and planning of a murder, of a senior constitutional officer in a democratic nation that the USA was not war with - Chile; the incitement and enabling of a mass genocide in East Timor; and the personal involvement in the kidnap and murder of a journalist living in Washinton DC.… (more)

LibraryThing member JeffV
Celebrated journalest Christopher Hitchens has spent the better part of the last few decades making a case that former Secretary of State Henry Kissinger should be tried for war crimes in light of atrocities committed during his role as custodian of US foreign policy. Events in Cypress, Greece, Chile, East Timor, Cambodia, Vietnam, China, Japan, and others are cited in this updated volume of Hitchen's 2002 case study. It speaks volumes that threats by Kissinger to sue Hitchens for defamation were withdrawn in light of evidence that credits Hitchen's contentions.

There is an undercurrent in recent American political history -- particularly under the watch of Republican presidents -- that we are a nation of the wealthy, for the wealthy, and the interests of these select few outweigh the national interests of the ideal we like to think is the United States. The CIA is brandished as a weapon to fulfill the desires of people such as Kissinger, and that includes kidnapping and murder. When Indonesia slaughtered hundreds of thousands of East Timorese, Kissinger throws up his arms, saying we can't be responsible for what others do with the weapons we sell. Then he continues courting relations with Indonesia, shrugging off the atrocity as a "domestic affair."

There's a reason so many countries around the world hate us now, and Henry Kissinger can be traced to much of that animosity. I don't think putting him in front a firing squad would undo all of the damage he created...it isn't a personal problem he created, but his crimes were committed on behalf of the United States, incriminating us all. Sadly, I don't think we'll even get the satisfaction of seeing him imprisoned for life...not when so many people still in power are continuing his despotic work.… (more)
7 more
LibraryThing member HadriantheBlind
A fiery and incisive look at the war crimes of an American statesman, as well as a critique of the international justice system. Hitchens at top form.
LibraryThing member bloom
This little book includes some of Christopher Hitchens' best investigative reporting. He puts former Secretary of State Henry Kissinger on trial (at last), and indicts him for war crimes and crimes against humanity in Vietnam, Laos, Cambodia, Chile, Cyprus, East Timor, for an attempted assassination of Greek dissident journalist. The book is slim, but fairly detailed, and while it focuses on Kissinger (deservingly), the implicit thesis of the book is the flaw of international legal standards, that is to say, when a statesman commits crimes and is powerless he is hanged, if the statesman is powerful he is worshipped. Perhaps a little light on footnotes, Hitchens prefers to provide internal citations, but I think book's conclusions are actually conservative; Hitchens often cites the most conservative number of dead civilians to avoid legal pressure, i.e. 100,000 dead in East Timor (most studies cite 200,000 in total), one can be sure that the figures are not politicized, Kissinger's legal team would have brought Hitchens down in two seconds if there had been number inflation. (...)… (more)
LibraryThing member JonArnold
Really this one’s Hitchens shooting one very large fish in a tiny barrel. Hitchens had a reputation for being a professional puppy kicker, taking down idols such as Mother Teresa and Bill Clinton. Here he turns his attention to the most notorious recipient of a Nobel Prize, a man to whom history has not been kind but capitalism has.

Hitchens doesn’t stint simply because his subject provides him with so much subject matter. It’s to his eternal credit that he’s as thorough as ever, not simply raging inarticulately. Not that Hitchens would ever have let himself be inarticulate. If anything Kissinger’s actions intensify his cold fury, particularly when he investigates how Kissinger may have been complicit in an assassination attempt on a foreign national in Washington DC itself. It’s a thorough shredding of Kissinger’s actions and motivations, detailing how he essentially abused his office for personal gain. Whilst it’s a polemic Hitchens always backs up his assertions with evidence, if anything understating his case at times. Even allowing for that it still leaves the reader sharing Hitch’s fury.… (more)
LibraryThing member adam.currey
Written in Hitchens' typical style, this book eviscerates Kissinger's political career and backs up every claim with facts and figures. Whether or not you're interested in Kissinger specifically, this is nevertheless an interesting history lesson on the geo-political situation of the 1960's and 1970's.
LibraryThing member br77rino
This book reminds me of The Hunger, which was a contemporaneous account of the Irish Potato Famine, and which I just couldn't finish (I read Part I only) because it was so horrificly depressing. In this work by Hitchens, he refers himself to it as dispiriting. That it is.
LibraryThing member cpg
In 2002, I had the opportunity to ask Christopher Hitchens what he would say to the conservatives who had a "strange new respect" for him based on his support for anti-terrorist activities by the USA. In response, he said that they should read The Trial of Henry Kissinger. I'm finally getting around to fulfilling that request.

Page 25: Hitchens points out that Telford Taylor, who represented the United States at the Nuremberg trials, said that by the standards of those trials the prosecutors of the war against North Vietnam would be found guilty of war crimes. (Hitchens hasn't said it yet, but Taylor specified that its not just the architects of the bombing campaign against North Vietnam but individual American aviators who would be war criminals.)

It seems to me that in order for Taylor's judgement to be meaningful, there must have *been* some coherent, objective standards used to prosecute war crimes in the wake of World War II. I am not so sure that there were. Representatives of the Soviet Union sat in judgement of German leaders at Nuremberg, but no Soviet leaders were (for example) held to account for the Katyn massacre. It will be interesting to see how (if he does so) Hitchens indicts Kissinger for the carpet bombing of Vietnam without also indicting Bomber Harris for the carpet bombing of Germany and FDR and Truman for, respectively, the firebombing and atomic bombing of Japan.

Page 34: Hitchens says: "In the period after the Second World War . . . the United States had denied even its closest allies the right to invade countries that allegedly gave shelter to their antagonists." Well, on 9/11, President Bush said: "We will make no distinction between the terrorists who committed these acts and those who harbor them". Didn't Hitchens agree with Bush then?… (more)
LibraryThing member stampfle
The Kissinger of Death, January 10, 2008
By Richard Stampfle "Richard S." (Nong Khai, Thailand) - See all my reviews


J. Paul Getty once said: "If you owe the bank $100 that's your problem. If you owe the bank $100 million, that's the bank's problem." Similarly, if you are a young black guy who has killed one person with a gun while high on drugs, you have a problem and you may find yourself on death row somewhere in the USA; but if you are a Nobel prize winner responsible for killing millions of people with the weapons of statecraft and real politick while high on arrogance and influence, society has a problem and may not be able to prosecute you.

Hitchens' book first appeared in 2001 and had additional facts added in 2002; still, 6 years later no one in the USA has dared to bring his case to court. Does that mean the case is weak? Or that someone in power has a problem? Hitchen's evidence seems credible but there may not be a court anywhere prepared to hear the case.

It is interesting that according to the back cover of the book, while Dr. Kissinger finds the book 'contemptible' it is not reported that he finds the contents are 'untrue.'

An extra star goes to Hitchens for his courage in taking on the 'establishment.'… (more)
Fewer