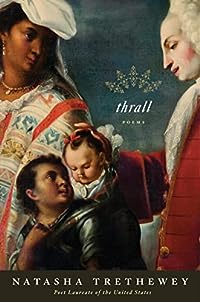 By unflinchingly charting the intersections of public and personal history, Thrall explores the historical, cultural, and social forces-across time and space-that determine the roles consigned to a mixed-race daughter and her white father. In a vivid series of poems about interracial marriage depicted in the Casta Paintings of Colonial Mexico, Trethewey investigates the philosophical assumptions that underpin Enlightenment notions of taxonomy and classification, exposing the way they encode ideas of race within our collective imagination. While tropes about captivity, bondage, inheritance, and enthrallment permeate the collection, Trethewey, by reflecting on a series of small estrangements from her poet father, comes to an understanding of how, as father and daughter, they are part of the ongoing history of race in America.… (more)

LibraryThing member bell7
The only other book of poetry I've read by Natasha Trethewey was Native Guard, which I loved. Thrall was good but didn't hold up to that same standard for me. These poems all address the complicatedness of mixed race, whether by exploring classic paintings and art or Trethewey's own (or perhaps her narrator's, I know that's often different in poetry though these felt very personal) relationship with her white father. The ones on art were particularly challenging because the artwork was not included. The final poem, "The Illumination," was my favorite.… (more)