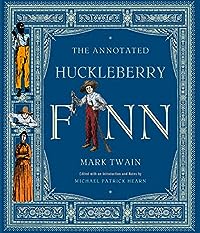 "Michael Patrick Hearn, author of the national bestseller The Annotated Wizard of Oz, has done equal justice to this great American novel. A Twain literary sleuth and an authority on children's literature, he considers all the literary, social, historical, and autobiographical aspects of Twain's classic tale of Huck and Jim's trip down the mighty Mississippi. In lively and fascinating annotations, Hearn's notes draw on everything from letters, manuscripts, and contemporary newspapers to the author's own frequent revisions and notes, various critical responses to the publication, and much previously unpublished material. The substantial introduction is, in essence, a mini-biography of a book and a man whose real name was Samuel Langhorne Clemens (1835-1910), and it recounts the novel's remarkably prickly history, resulting in its being banned perhaps more than any other work in American history." "In this new edition, the characters of Hannibal, Missouri, come vividly alive, as if Hearn was steering the raft itself. We encounter, among others, the kindhearted Widow Douglas, the dreaded Miss Watson; the enlightened runaway slave Jim, whom Huck meets on Jackson's Island; an endless parade of thieves, slaveowners, and sheer opportunists; as well as Tom Sawyer and Aunt Sally, whose desire to adopt and "sivilize" Huck propels him to flee to the American West. Likewise, the Mississippi River "emerges as a living force regardless of the vain attempts of men to tame it." Hearn, by illustrating literary and historical themes that we never knew before, demonstrates that Huckleberry Finn did more than merely redefine the "bad-boy's book"; it galvanized and transformed world literature."--Jacket.… (more)