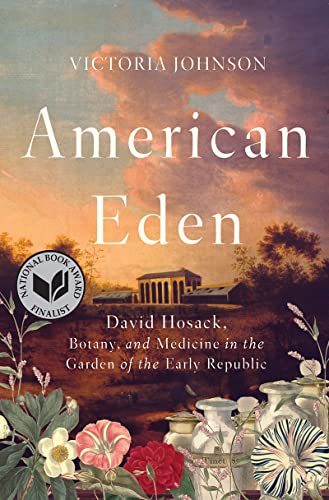 American Eden: David Hosack, Botany, and Medicine in the Garden of the Early Republic

When Dr. David Hosack tilled the country's first botanical garden in the Manhattan soil more than two hundred years ago, he didn't just dramatically alter the New York landscape; he left a monumental legacy of advocacy for public health and wide-ranging support for the sciences. A charismatic dreamer admired by the likes of Jefferson, Madison, and Humboldt, and intimate friends with both Hamilton and Burr, the Columbia professor devoted his life to inspiring Americans to pursue medicine and botany with a rigor to rival Europe's. Though he was shoulder-to-shoulder with the founding fathers--and even present at the fatal duel that took Hamilton's life--Hosack and his story remain unknown. Now, in melodic prose, historian Victoria Johnson eloquently chronicles Hosack's tireless career to reveal the breadth of his impact. The result is a lush portrait of the man who gave voice to a new, deeply American understanding of the powers and perils of nature.… (more)

LibraryThing member MM_Jones
History of one doctor's quest to improve medicine and build America's first botanical garden. Lots of fascinating detail in this deeply researched story of an important figure in early New York. It suffers somewhat in scope with many detours into other contemporary happenings.
2 more
LibraryThing member Devil_llama
This is a biography of a little known man that was well known in his day; he moved in the highest circles of the Revolutionary War generals and presidents. He was the doctor at the Hamilton-Burr duel. But...this isn't so much a biography of a man as of the history of the early part of the country. It is a story of how New York City went from being a poor second to Philadelphia as a center of art, literature, culture, and science to becoming the city that defines those things for the US. Much of that is due to the subject of this book, and his friends. The main problem I have with this very readable book is that you get almost nothing about the good doctor other than his significant scientific and botanical accomplishments. Wives are mentioned in passing, children are born and die with only a minor digression, making it less a biography than a history. It is not the story of his life so much as the story of the scientific flowering of New York City seen through his works. Overall, it was fascinating reading, and the breadth of the book is astonishing, but I would have liked to see fewer repetitions of key points, a little more detail about the garden, and perhaps including more about some of the women that were crucial in this period. The author does mention at one point that the doctor believed in training girls in botany, and actually did so in his later career, but it is difficult to know that women existed in New York City at this period except when they were losing children, dying in childbirth, or grieving husbands shot in a duel...or paying for their husband's obsessions with money they brought to the marriage. Good, but not great.… (more)
LibraryThing member muddyboy
A very detailed and enlightening study of a man who would have a profound effect during his day and even today spreading his beliefs on the importance of Botany's benefits to society. David Hosack made this his life's work. He also rubs elbows with many of the founding fathers and is friends with Alexander Hamilton and Aaron Burr and is present as the doctor at their famous duel. He will continue to be friends with Burr even after its conclusion. This has an amazing amount of information on a variety of topics including New York City and Philadelphia history and the leading political and intellectual leaders of that time.… (more)
Fewer

Founding gardeners : the revolutionary generation, nature, and the shaping of the American nation by Andrea Wulf
The Gulf: The Making of An American Sea by Jack E. Davis
The New Negro: The Life of Alain Locke by Jeffrey C. Stewart
Frederick Douglass : Prophet of Freedom by David W. Blight
We The Corporations : How American Businesses Won Their Civil Rights by Adam Winkler
2 more
The soul of America : the battle for our better angels by Jon Meacham
Rightful heritage : Franklin D. Roosevelt and the land of America by Douglas Brinkley
Fewer