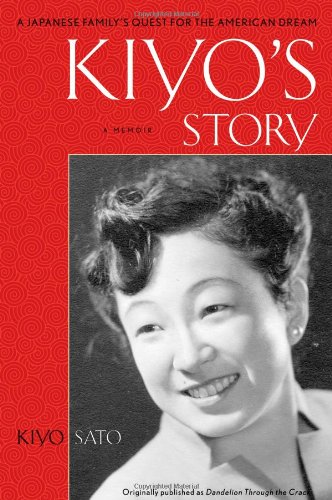 Kiyo's Story: A Japanese-American Family's Quest for the American Dream

When her father left Japan, his mother told him never to return: there was no future there for him. Shinji Sato arrived in California determined to plant his roots in the Land of Opportunity even though he could not become a citizen. He and his wife started a farm and worked together with their nine children. At the outbreak of World War II, when Kiyo, the eldest, was 18, the Satos were ordered to Poston Internment Camp. Though they had lived in the US for two decades and their children were citizens, they were suddenly uprooted and imprisoned by the government.

LibraryThing member Beth350
This book is an exceptional monument to the courage and sensibility of Kiyo Sato's parents. Her father came to the U.S to work in 1911 as a 14-year-old peach picker. On his first trip back to Japan, he met and married her mother and they successfully raised nine children under some of the most trying circumstances. They bought a small fruit farm near Sacramento, CA and were quite successful growing strawberries prior to Pearl Harbor. When all Japanese living on the West Coast were rounded up and sent to live in internment camps, they lost nearly all of their belingings. Luckily, when they got out after the war, they still owned their 20 acres.… (more)