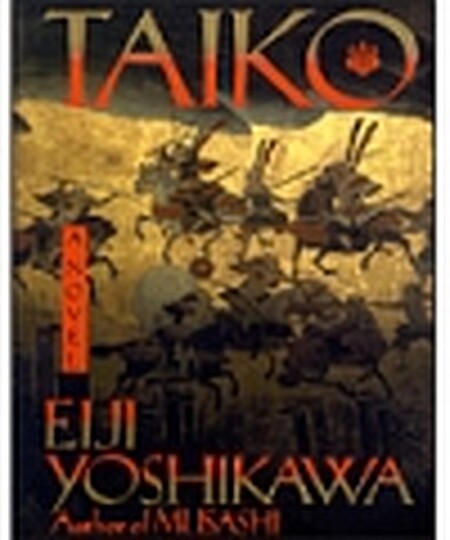 Taiko: An Epic Novel of War and Glory in Feudal Japan

In the tempestuous closing decades of the sixteenth century, the Empire of Japan writhes in chaos as the shogunate crumbles and rival warlords battle for supremacy. Warrior monks in their armed citadels block the road to the capital; castles are destroyed, villages plundered, fields put to the torch. Amid this devastation, three men dream of uniting the nation. At one extreme is the charismatic but brutal Nobunaga, whose ruthless ambition crushes all before him. At the opposite pole is the cold, deliberate Ieyasu, wise in counsel, brave in battle, mature beyond his years.

LibraryThing member julsitos2
One of the most complex stories in Japanese literature I've ever read.
5 more
LibraryThing member santhony
This is a story of feudal Japan and unification of the clannish and war torn country by a once poor, downtrodden commoner who became Taiko (supreme ruler) through a series of battles and diplomatic strategies.

The story is captivating and the subject matter is rich with possibility. However, there are two main shortcomings with the novel that I believe detract from what could have been a five star effort:

1. The virtual avalanche of Japanese names, for both places and people make it sometimes extremely difficult to follow some story lines. I am well aware that this might be exclusively a cultural issue, but I'm assuming that most readers of this review are American or at least non-Asian. Many of the names are very long and to complicate matters, sometimes differ from each other by a single letter. A character might appear, then reappear later in the story. In such cases it might take quite awhile to become apparent that this is the same character that appeared before. This is only slightly addressed with a "cast of characters" that appears at the beginning of each chapter. Inability to track key characters is a major hindrance to enjoyment of the story.
Of somewhat lesser importance is confusion regarding place names. This could be dramatically improved upon with a more detailed map, or preferably additional maps. It is impossible to follow the many travels and battle plans without any meaningful reference to a detailed map.

2. This is a translation. As such, the prose simply fails to flow as I'm sure it does in the original. Also, there were numerous errors in sentence structure, misspellings and dropped words. Not enough to constitute a major problem, but simply indicative of the problems faced in translation.

As I pointed out earlier, the subject matter is fascinating and the story is well worth telling. The obvious comparison between this novel and Shogun must be made. In my opinion, Shogun is far superior. It deals with much the same subject matter with none of the shortcomings listed above. If forced to choose between the two, I would not hesitate to recommend Shogun. In fact, given the time required to read this book (not just the 1000 pages, but the increased time required as a result of the problems set out above), I could only recommend this book if you've run out of other things to read.… (more)
LibraryThing member Larxol
Fascinating story of the battles and intrigues leading to the unification of Japan in the 16th Century, told as episodes in the life of Hideyoshi. It's a long book, and the flat style makes it a bit of slog.
LibraryThing member DRFP
I find it strange that many people seem to regard this epic as superior to "Mushashi". In my opinion "Musashi" is far better.

Perhaps having studied Japanese history at university - and knowing how this story would proceed in the grand scheme - blunted some of the suspence. However, I felt the main problem was Yoshikawa being constrained by a much more real historical character in Hideyoshi (unlike the more mystical Musashi).

To me, large portions of this novel simply felt straight jacketed. Not to mention there are some off-putting jumps - Hideyoshi is frankly annoying as a child for the first 100 pages, but then suddenly is all mature and sensible.

There are times when Yoshikawa shows the magic of "Musashi" - certain battles are great, and Nobunaga totally upstages Hideyoshi - but overall I find this much more average than the stellar "Musashi".… (more)
LibraryThing member PhoenixTerran
Taiko: An Epic Novel of War and Glory in Feudal Japan is the second work by Eiji Yoshikawa that I have read. Taiko is probably Yoshikawa's best known work in English following Musashi, another of his epics, which I have also read. Yoshikawa was a prolific author in Japan, particularly respected as a historical novelist, but only four of his works are currently available in English, the other two being his telling of The Tale of Heike and his memoir Fragments of a Past. Taiko was first released in Japan in 1941. The English translation by William Scott Wilson was initially published in 1992 by Kodansha International and then again in 2000. Like Musashi, the English edition of Taiko has been abridged from the original. I'm not entirely sure how long Taiko was to begin with, but the shortened version of the novel is nothing to ridicule with well over nine hundred pages of dense text.

Taiko begins in the year 1536. At the time Hiyoshi, later known as Toyotomi Hideyoshi, was only a troublesome young boy the age of six. The novel follows him and the tumultuous state of Japanese society as he becomes one of Oda Nobunaga's most trusted retainers. Nobunaga is extraordinarily ambitious and ruthless in his methods striving to unite Japan under his own banner. It's a dream that can't be realized without the aid and efforts of Hideyoshi and Tokugawa Ieyasu, who would go on to found the Tokugawa Shogunate. The prospect of unifying Japan is not an easy one. After the collapse of the Ashikaga Shogunate, the country was thrown into a state of chaos with many clans fighting each other in order to claim the power to rule.

The most difficult thing about reading Taiko is the sheer number of characters involved in the story. Someone might be thoroughly introduced only to die or otherwise meet fate a few pages later. An added challenge to this is that many of the characters undergo multiple name changes as the novel progresses. Taiko is divided into ten books. At the beginning of each of these sections, a brief list of prominent people and places is given. This is very useful, but a more comprehensive and complete register would have been even more helpful. Some familiarity with feudal era Japan would be extremely valuable for or perhaps even expected of someone undertaking to read Taiko. It's not always clear why certain people or references that are made are important without a basic understanding of the the historical context of the story. The constantly shifting politics and alliances can likewise be difficult to follow.

Taiko is described as an epic for good reason. It is a long and complicated novel, capturing the end of the Warring States period and the following attempt at the political unification of Japan. Many of the characters pull off some very impressive diplomatic and military maneuvers. The near constant state of war allows Yoshikawa to write brilliant battle sequences and when there isn't fighting there is plenty of political intrigue to keep everyone occupied. Taiko provides an immersive, and at times even inspiring, experience of sixteenth century Japan. However, the novel's length, even abridged, is certainly felt. There really isn't much character development, although people might exhibit sudden changes in behavior, and even the narrative arc comes across as somewhat flat. Perhaps Yoshikawa was too constrained by the historical realities of the period. But there's some great stuff in here, too, and I'm glad I took the time to read Taiko.

Experiments in Manga… (more)
LibraryThing member Dream24
I wasn't sure what to expect when I took a stab at reading this book. But I am glad I did because it opened up a whole world of what feudal Japan may have been like during that time period.

The book basically follows Hideyoshi's life from when he was a young country farmer boy up until one of the high points of his career, but not the entirety of his life (which probably would have made the book much longer and ended on a low point).

There are a whole bunch of characters we are introduced to and it naturally it gets confusing, especially when they have similar names and have a tendency of renaming themselves when they go through certain phases. But eventually, you figure out who the major players are and the role they play in shaping Japan from various clans into a united Japan.

We have the privilege of getting to know Hideyoshi and some of his mind frame (I doubt, anyone can truly know a person unless they were in their shoes, but this would probably come pretty close). Hideyoshi is a very likeable person, a people person and who is not only humble and loyal, but also ambitious too. A life long diplomat and peace keeper (war is the last resort, if necessary), Hideyoshi almost always has the perfect strategy to outwit his enemies or evade danger. It is rare to find that in a man, who isn't arrogant or foolish, which he is the complete opposite of. There's a whole side of the Japanese culture, that we have only scrapped the surface of in this book. But I loved that honour, loyalty, respect and so many other things come into play and are prominent throughout.

If you are a historical buff or interested in samurai, definitely worth a read. But be prepared to be in it for a long ride!… (more)
Fewer

Musashi by Eiji Yoshikawa
The tale of genji by Murasaki Shikibu,
Shipwrecks by Akira Yoshimura
Kokoro by Natsume Soseki