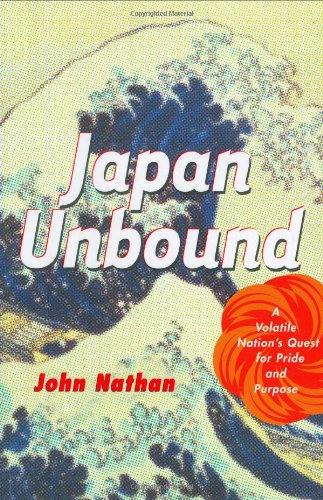 Japan Unbound: A Volatile Nation's Quest for Pride and Purpose

Not since World War II has Japan faced a crisis like the one before it now. An apparently endless recession has weakened the foundations of the traditional family and severed the bond between Japan's corporations and employees. Unruly children turn classrooms into battlefields. Ultranationalist pride and xenophobia are celebrated in best-selling comic books and championed by media superstars, including the governor of Tokyo. Upheavals across the society have significant ramifications for America. As the Japanese reject their traditions wholesale, they view their half-century-old connection to the United States with mounting skepticism. Drawing on his fluent Japanese and unmatched intimacy with the culture, John Nathan reveals a nation newly unmoored from the traditions that have shored it up and sometimes stifled it. Dramatic changes in business are augured by Carlos Ghosn, the Brazilian president of Nissan, once scorned as an outsider, now hailed for reviving a moribund giant. The soft-spoken artist Yoshinori Kobayashi foments and reflects rabid nationalism among millions with his hugely popular comic books. Yasuo Tanaka, a puckish writer and bon vivant, wins the governorship of Nagano and revolutionizes Japanese politics with his radical populism. Nathan delves beyond Japan's celebrities to map the epic shifts in daily life. He unveils the horrors of the Japanese school system. He goes inside a "career transition service" to witness the novel, nuanced rituals of job-hunting Japanese-style. He takes the pulse of ordinary citizens who are caught up in the country's many profound social shifts: agitprop pop culture, emerging feminism, environmentalism, teenage consumerism, entrepreneurship, and more. With immediacy and élan, John Nathan dispels conventional wisdom about Japan and replaces it with a brilliant vision of a country roiling with pride, uncertainty, creativity, fear, and hope.… (more)

The enigma of Japanese power : people and politics in a stateless nation by Karel van Wolferen
Inventing Japan, 1853-1964 by Ian Buruma
The Chrysanthemum and the Sword: Patterns of Japanese culture by Ruth Benedict
Shutting out the sun : how Japan created its own lost generation by Michael Zielenziger
Looking For the Lost : Journeys Through a Vanishing Japan by Alan Booth