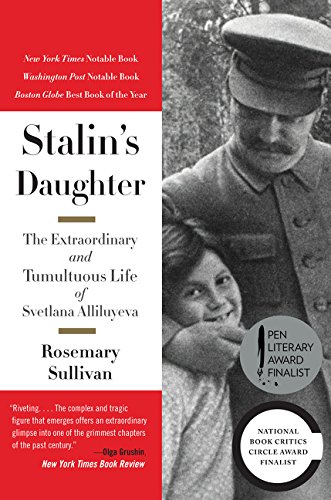 Stalin's Daughter : The Extraordinary and Tumultuous Life of Svetlana Alliluyeva

"The award-winning author of Villa Air-Bel returns with a painstakingly researched, revelatory biography of Svetlana Stalin, a woman fated to live her life in the shadow of one of history's most monstrous dictators--her father, Josef Stalin. Born in the early years of the Soviet Union, Svetlana Stalin spent her youth inside the walls of the Kremlin. Communist Party privilege protected her from the mass starvation and purges that haunted Russia, but she did not escape tragedy--the loss of everyone she loved, including her mother, two brothers, aunts and uncles, and a lover twice her age, deliberately exiled to Siberia by her father. As she gradually learned about the extent of her father's brutality after his death, Svetlana could no longer keep quiet and in 1967 shocked the world by defecting to the United States--leaving her two children behind. But although she was never a part of her father's regime, she could not escape his legacy. Her life in America was fractured; she moved frequently, married disastrously, shunned other Russian exiles, and ultimately died in poverty in Spring Green, Wisconsin. With access to KGB, CIA, and Soviet government archives, as well as the close cooperation of Svetlana's daughter, Rosemary Sullivan pieces together Svetlana's incredible life in a masterful account of unprecedented intimacy. Epic in scope, it's a revolutionary biography of a woman doomed to be a political prisoner of her father's name. Sullivan explores a complicated character in her broader context without ever losing sight of her powerfully human story, in the process opening a closed, brutal world that continues to fascinate us. Illustrated with photographs"--… (more)

LibraryThing member akblanchard
Svetlana Alliluyeva (1926-2011), Joseph Stalin's only daughter, lived longer than most of the Russian dictator's other family members and associates, but hers peripatetic life was characterized by impulsivity, loneliness and deep losses. She is best remembered for her surprise defection to the United States in 1967, and her even more surprising return to the Soviet Union in 1984. Author Rosemary Sullivan explores Alliluyeva's story in great detail in Stalin's Daughter: The Extraordinary, Tumultuous Life of Svetlana Alliluyeva.

Alliluyeva's mother committed suicide when her daughter was only six years old. She rarely saw her powerful father, but she received a privileged, isolated upbringing as a "Soviet princess".

Throughout her life, she was ruled by her impulses. As a young woman she married and divorced three times, and she was rumored to be a "nymphomaniac". Even her 1967 defection was the result of caprice, not political principle.

As an older woman she was given to paranoia and feared the intrusion of both the CIA and the KGB into her life. Many potential friends rejected her automatically when they found out her father's identity; others wanted to get into her good graces because they falsely assumed that she had inherited Stalin's mythical Swiss bank accounts. In reality, Alliluyeva had little understanding of financial matters and gave away much of what she earned as a writer and translator. At the end of her life, she was nearly destitute.

Author Sullivan goes into much detail about Alliluyeva's many dwelling places (as an adult, she relocated frequently, usually on a whim) and her famous and not-so-famous friends, but is considerably more reticent about other aspect of her subject's life. For example, in 1962 Alliluyeva was secretly baptized into the Russian Orthodox Church. Later in life she converted to Roman Catholicism. Was her demonstration of piety a means of rebellion against the Soviet Union's official atheism, or did she develop a genuine faith? Other than noting that Alliluyeva occasionally attended religious retreats, Sullivan leaves this question unanswered.

Sullivan's account of Alliluyeva's life is a sad story that only intermittently held my interest as a non-specialist reader. The parts about Alliluyeva's childhood and her involvement with Frank Lloyd Wright's cult-like architectural commune Taliesin West, where she met the American man who briefly became her fourth husband, comprise the book's most engaging chapters. The rest of the book is dreary and goes on too long. Allilyeva's life at the periphery of twentieth-century history does not stand up to over six hundred pages of scrutiny (almost eight hundred counting the footnotes and index).… (more)
4 more
LibraryThing member EllenH
Excellent book on Svetlana Alliluyeva. Not very flattering accounts of the people who took advantage of her here in America, especially Olgivanna Wright and Wesley Peters and the Frank Lloyd Wright Taliesin group.
LibraryThing member bogopea
Well- researched and written.
LibraryThing member kremsa
Stalin's Daughter is a very well researched and written biography about Svetlana Alliluyava. I knew nothing about her prior to reading this book and was intrigued by much of what I read. She was a woman who led a tragic life and seemed to constantly be running away from or moving to another place to escape her past and find happiness. The book provides a lot of insight into the Russian government and the US and Russian relationship during her life. It is fairly quick reading but took me awhile since it is a rather thick hardcover book hence non-commuter friendly so I opted to only read it at home which didn't h
happen as often as I would have liked.… (more)
LibraryThing member MaggieFlo
I listened to the audio version on a long car trip.
I’m not sure if the print version has a family tree as i found it difficult to follow all of the people that the author refers to.
This is a long biography of Svetlana Stalin the only daughter of Joseph Stalin, the former leader of the Soviet Union.
She was born in 1926 and lived until November 22 2011.
Her mother Nadia committed suicide when Svetlana was only 6 years old which meant that she was raised by governesses and relatives while her father ruled the Soviet Union. She was unaware of he father’s various pogroms, famines and murders until she was an adult. She adopted her mother’s last name Alliluyeva when she realized the significance of her father’s past. She defected to the United States in 1967 while on a trip to India to spread her husband’s ashes.
Rosemary Sullivan has uncovered and described a huge amount of research about this woman and has created a readable yet lengthy story of her life. Svetlana married 4 times and had three children. She abandoned her two children Joseph and Katya when she defected to the USA. She married the architect Wesley Peters and gave birth to a daughter Olga in 1971. As an American she used the name Lana Peters.
The psychological profile this woman is interesting. She was very intelligent and sociable but also very naive, impulsive and paranoid at times. Once in the USA she struggled to find a career and wrote Twenty letters to a friend, a her memoir about her life in the Soviet Union. Although she earned quite a sum at the time, she had no money sense and was naive about her finances. She overspent on family and friends spent her later years in financial difficulty.… (more)
Fewer

Clementine : the life of Mrs. Winston Churchill by Sonia Purnell
Former people : the final days of the Russian aristocracy by Douglas Smith
Stalin: The Court of the Red Tsar by Simon Sebag Montefiore
Young Stalin by Simon Sebag Montefiore
Red Notice: How I Became Putin's No. 1 Enemy by Bill. Browder
2 more
A Train in Winter: An Extraordinary Story of Women, Friendship, and Resistance in Occupied France by Caroline Moorehead
Spain In Our Hearts: Americans in the Spanish Civil War, 1936-1939 by Adam Hochschild
Fewer