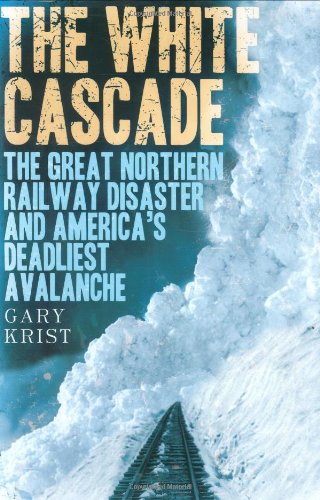 "In February 1910, a monstrous blizzard hit Washington State. High in the Cascade Mountains near the tiny town of Wellington, two trainloads of cold, hungry passengers and their crews found their railcars buried in rising drifts, parked precariously on the edge of a steep ravine. An army of the Great Northern Railroad's men worked round-the-clock to rescue the trains, but the storm was unrelenting. Suddenly the earth shifted and a colossal avalanche tumbled, sweeping the trains and their sleeping passengers over the steep slope and down the mountainside."--From source other than the Library of Congress

LibraryThing member tymfos
What can I say? For a railroad buff who is also fascinated by books about disasters, this was the perfect read. It's utterly amazing that I had never heard about this tragedy until I found this book.

In late February of 1910, an almost unprecedented late-winter snowstorm hit the US Pacific Northwest, causing massive disruption to transportation throughout the region, and utterly crippling the Great Northern Railroad in the vicinity of Stevens Pass, the railroad's Cascade Mountains summit crossing. Two Great Northern trains, the #25 Seattle Express (filled with passengers) and the #27 Express Mail, were eventually stranded on passing tracks at Wellington Station on the western side of the GN Cascade Tunnel. There they sat for days, while railroaders worked round-the-clock in abysmal conditions to clear the snow-drifted tracks so that the trains could move again.

The trains sat on a narrow ledge -- with a steep, snow-covered mountainside rising above them to one side, and a deep precipice falling to the other side . The treacherous and isolated terrain made evacuation of the trains by foot seem a less-than-viable option. As temperatures fluctuated and the precipitation continued falling, in varying mixtures of snow, ice, and rain, the snowpack on the slope above them became more and more unstable . . .

This is Gary Krist's first venture into non-fiction, and he brings the full storytelling skills of a novelist to this true story of a railroad under siege by Mother Nature. The narrative is well-paced, vividly (but not luridly) presented, never dry. Yet his research seems thoroughly done, too, with solid endnotes explaiing his sources and how he put the story together from the historical record.

I highly recommend this book, especially to lovers of railroad history.… (more)
5 more
LibraryThing member bemidjian
This is a thrilling and comprehensive account of one of the greatest railroad industry disasters in America. The author follows heroes and victims, executives and snow shovellers and passengers who found themselves trapped by the mother of all blizzards in the hamlet of Wellington, Washington in 1910. Here, for what seemed good reasons, two trained were parked on the edge of a cliff and under a snow covered slope. They ultimately were swept away by an avalanche. We learn from passenger diaries, a letter from one victim to his mother, the recollections of survivors and from court testimony what happened and why the trains could not leave Wellington despite the best efforts of railroad workers and the latest 1910 technology. Read this one.… (more)
LibraryThing member slug9000
This is a fascinating book about a subject I knew nothing about. I went into this book knowing nothing about mountain railroading, the Great Northern railroad, avalanches, or the Cascade Mountain range. I learned a great deal about all of those topics.

The book is well organized and easy to follow - we learn about the Cascades, the history of railroading in the Cascades, the backgrounds of some of the key passengers and railroad employees, the conditions that led to the trains' being stranded, and the conditions that ultimately caused the avalanche. This is followed by a description of the various civil lawsuits that faced the Great Northern railroad after the avalanche, some of the subsequent safety measures put in place as a direct result of the avalanche, and details about the lives of the people who survived and the families of those who didn't.

I am giving the book four stars because I felt that it dragged a little bit. The lead-up the avalanche itself took up more than half of the book. The background is necessary to understanding why the trains were stranded in such a hopeless position, but it did get pretty dry in a few spots.

However, that being said, it is still, overall, an interesting thriller, and it is a lot more than just a disaster story. It is a disaster story in the context of rapidly changing times in a rapidly changing area. It's got a little bit of everything: labor relations, changing attitudes towards railroads, the role of the railroad tycoon, the beginning of a regulatory environment for an industry that previously operated unchecked, and even, to some extent, a look at how women and foreign laborers were perceived. All of this was interspersed throughout the story, compensating for some of the dry spots in the book and making me really excited to get back to the book once I put it down.

Also - two recommendations: 1.) Bookmark the pictures in the middle of the book and go back to them - they are all clustered together and if you look at them all and read the captions, there are some spoilers. 2.) Google the old Cascade tunnel and the Wellington snow shed when you are done with the book - there are some interesting pictures of it as it stands today, and it is interesting to view 1910 structures as they exist today.… (more)
LibraryThing member Helcura
This engaging tale of the avalanche at Wellington, Washington is a fast read, with a smooth style. The author focuses on several individuals, providing enough detail to encourage the reader to really care about them. I was slightly annoyed by the author's tendency to tell us what individuals must have been feeling, but it didn't spoil the book.

Worth reading more than once.… (more)
LibraryThing member nmele
A few weeks after driving over Stevens Pass, my book club decided to read this book about a railroad disaster that took place there in 1910. I particularly appreciated how well researched and narrated this book is, but one of the best things about it is that Krist, the author, takes time to explore the aftermath and ultimate impact of the incident.… (more)
LibraryThing member MsMixte
A vivid look at the havoc wreaked by the deadliest avalanche in the United States. Living in King County, I had heard of the disaster, but not ever read anything in depth about it. Well worth reading.
Fewer

Under a flaming sky : the great Hinckley firestorm of 1894 by Daniel Brown
Cascade-Olympic natural history by Daniel Mathews
The Good Rain: Across Time and Terrain in the Pacific Northwest by Timothy Egan
The big burn : Teddy Roosevelt and the fire that saved America by Timothy Egan
Eruption : the untold story of Mount St. Helens by Steve Olson
8 more
The worst hard time : the untold story of those who survived the great American dust bowl by Timothy Egan
Triangle : the fire that changed America by Dave Von Drehle
Puget's Sound : a narrative of early Tacoma and the southern Sound by Murray Cromwell Morgan
Railroad signatures across the Pacific Northwest by Carlos A. Schwantes
The Measure of a Mountain: Beauty and Terror on Mount Rainier by Bruce Barcott
Washington : a centennial history by Robert E. Ficken
Fire & ice : the Cascade volcanoes by Stephen L. Harris
Of men and mountains by William O. Douglas
Fewer