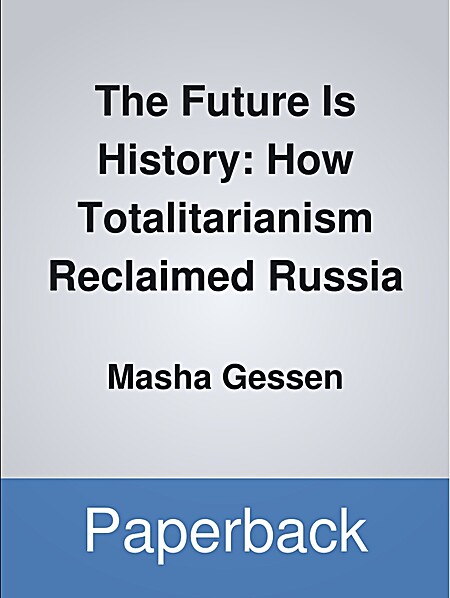 The Future Is History: How Totalitarianism Reclaimed Russia

Hailed for her "fearless indictment of the most powerful man in Russia" (The Wall Street Journal), award-winning journalist Masha Gessen is unparalleled in her understanding of the events and forces that have wracked her native country in recent times. In The Future Is History, she follows the lives of four people born at what promised to be the dawn of democracy. Each of them came of age with unprecedented expectations, some as the children and grandchildren of the very architects of the new Russia, each with newfound aspirations of their ownas entrepreneurs, activists, thinkers, and writers, sexual and social beings. Gessen charts their paths against the machinations of the regime that would crush them all, and against the war it waged on understanding itself, which ensured the unobstructed reemergence of the old Soviet order in the form of todays terrifying and seemingly unstoppable mafia state. Powerful and urgent, The Future Is History is a cautionary tale for our time and for all time.… (more)

LibraryThing member rivkat
Gessen tells a number of individual stories: Russians whose ambitions for change after Communism collapsed mostly were dashed. Realistic social science and public debate had been impossible under the Soviet regime, so people didn’t even know what other people thought—people didn’t even necessarily think of themselves as entitled to have opinions. Ethnic tensions had been suppressed, not overcome. Rather than eliminating the KGB entirely, Yeltsin divided it among the republics, allowing Russia to inherit a functioning secret police. The political disruptions, the coups and counter-coups, of the transition/dissolution became a warning that anything could happen in politics: “Looking at [the charred remains of the White House, burned in one of these disruptive events], one wanted to stay as far away from politics as possible.” Gessen also identifies a self-perception of Russia as a poor country; added to that, two-thirds of survey respondents in the new academic study of Russians thought they earned less than other people of comparable skill and experience, “a statistical impossibility that doomed Russians to jealousy.” Privatization and Ponzi schemes, often indistinguishable, thrived but only left criminals richer.

While Russians were tired of thinking of themselves as inferior, Gessen suggests, they didn’t have a positive national self-concept other than as what she dubs a “blank mirror of the hostile and violent regimes under which Russians had long lived”: open, simple, and patient (which is to say, tolerant of violence). A totalizing ethos of Russianness gained currency, along with a resurgence of contempt for the US, which Gessen attributes in part to “a sort of habitual insensitivity Russians as a society had developed in response to the wars, the terror, the violence, and poverty of its own twentieth century” and in part to a history of defining themselves specifically in opposition to Americans. Putin deliberately suppressed civil society to prevent dissension from effecting change, aided by “political technologists” who created faux opposition parties and positions giving an illusion of actual debate. The new government-funded groups “had training camps and cool T-shirts, and in some smaller cities they organized dances and other leisure activities where none had been available.” New rules required independent candidates—those not already members of Parliament—to submit two million voter signatures to be a candidate, with no more than 50,000 from any one region of the country. This made a joke of democracy, and everyone knew it—that was the point.

Meanwhile, trumped-up criminal charges as a means of control spread from a defined class of people who’d ventured into the public sphere (“entrepreneurs engaged in property disputes, select politicians (who were also, more often than not, entrepreneurs engaged in property disputes), and radical political activists”) but beyond, meaning that choosing to disengage from the state wasn’t sufficient protection. Criminalization became the means to protect children from abortion, from drugs, from pedophiles (conflated with homosexuals). Homosexuality was apparently the key to all the other prejudices: One lieutenant tells one of Massen’s subjects that an antisemitic book linking homosexuality and Judaism had been distributed to every soldier in his platoon. ussian nationalists could both praise the National Organization for Marriage in the US, claiming the moral leadership of European Christianity, and tout sexual liberalization as an aberration from outside. By the way, neo-Nazi Richard Spencer is married to a Russian woman who served as English translator and American popularizer for a Russian theorist of nationalism who’s heavily influenced Putin.

Putin constantly connected the idea of political protest to sexual perversion, for example “joking” that he thought that white-ribbon-wearing protestors had pinned condoms to their jackets and referring to US imperialism with a term that translates as “they had everyone up the ass,” which could keep a Freudian busy for a while. And of course the classic move: the government blames protest on paid outside agitators (from the US), because that’s how it gets its own business done. Censorship, both of books and of increasingly risky public gatherings, increased due to vague laws that could be enforced at will. The contrast between “traditional values” and “foreign influence” allowed the regime to purport to act in the name of a real ideology, rather than in service of the constant churn that makes totalitarianism hard to fight. “[A] constant state of low-level dread made people easy to control, because it robbed them of the sense that they could control anything themselves.”… (more)
6 more
LibraryThing member Schmerguls
5550. The Future Is History How Totalitarianism Reclaimed Russia. by Masha Gessen (read 11 Apr 2018) (National Book Award nonfiction prize in 2017) This is the 38th National Book Award nonfiction prizewinner I have read. It tells the sad story of how Russia under Putin has reverted to totalitarianism, step by step since Putin assumed power in 2000. And it appears that many in Russia prefer 'stability' to freedom and so the majority in Russia are not displeased with that sad situation. The book is not too well organized and jumps around a lot, telling of the struggles of some activists in a rather disjointed way. Considerable time is devoted to the trials of homosexuals, which is not a big concern of mine since it is not too long ago that such had in the United States a status that was criminal--if Russia could have as much freedom as existed in the USA 50 years ago one could be satisfied In general I would have preferred a chronological history of Russia from the fall of the USSR to the present--whichis what I hoped this book would be. But it follows a few individualsand tells of their difficulties. Reading this dismal account was not a joy.… (more)
LibraryThing member Citizenjoyce
This book about Russian history, totalitarianism, authoritarianism, the sociology and psychology of the Russian people and the rise of Putin. I knew Putin had a bad history with LGBT oppression, but I wasn't aware of the extent of it. It seems trump and Putin are using the same playbook. Neither, I think, cares all that much about the LGBT community but are quite willing to use the oppression as a means of unifying their base around a cause. Family values is a great rallying cry for oppression by both politicians, but Putin also throws in pedophilia as a natural accompaniment to homophobia. Also very important is the stress on racial purity and damage done to a country by foreigners. I hadn't read about the psychology and sociology of the Russian people before and why they have a strong need for authority. Keep the people impoverished, religious and discriminating - that's the rallying call of a tyrant. Then they can use the resources of the country to benefit their friends and supporters.… (more)
LibraryThing member Farree
Okay. So here is a book I first heard about on NPR. It sounded so interesting that I suggested that my local library get a copy, and they did! This reads almost like Solzhenitsyn did in the early 1970s, in terms what the heck is actually going on in Russia, Ukraine, Chechnya, etcetera these days. This will bring you up-to-date. It's very well-written and translated (if it was translated - I can't remember for sure…..) They did interview Masha Gessen on NPR, as I recall. Very well done, and maybe a prediction of what could happen in the US if enough US citizens decide that freedom is not all that important. (It is! It is - take my word. It is!) Let us pray.… (more)
LibraryThing member adaorhell
& i will be your mirror, reflecting what you are, incase you didn’t know. what horrors.
LibraryThing member dwhatson
Through the lives of four of its citizens, Masha Gessen shows the reader the political morphing of modern Russia. The book begins with the fall of the Soviet Bloc, meanders through the country’s brief flirtation with a more liberal political system before finally falling into step with the totalitarian methods of its current leaders.

This is more than a modern history lesson. Gessen makes good use of her characters allowing the reader to see how universalities such as personal relationships, employment, accommodation, personal liberties, and the availability of common commodities are affected as the structure of government changes. Through the lives of her four central characters, their families, friends, and associates, Gessen also examines the Russian psyche during the post-Soviet era, the use of disinformation and propaganda, corruption, and the legal system.

This is not a book that I wished to finish quickly. I found greater satisfaction in reading a section and then spending a bit of time digesting and reflecting upon what I’d read. Overall, I quite enjoyed Gessen’s book as her real characters allow the reader to peer into a society which defines Kafkaesque. Not only did I find it illuminating, but the book also made me reflect upon the use of disinformation and propaganda (particularly in relation to social media) by not just Russia, but also western governments. If you are interested in the history and politics of Russia then I would consider reading The Future Is History.… (more)
LibraryThing member arosoff
Gessen tries to tell the tale of the past 30 years of Russia through the stories of several people who lived through the transition, mostly as children. Her stated goal is to try to show both the outside and inside--the personal experience (especially as the youngsters grow up and become politically active) and the broader picture. It's fascinating, but sometimes feels a little disjointed--there's so much ground here to cover.… (more)
Fewer

The Man Without a Face: The Unlikely Rise of Vladimir Putin by Masha Gessen
Say nothing : a true story of murder and memory in Northern Ireland by Patrick Radden Keefe
Dark money : the hidden history of the billionaires behind the rise of the radical right by Jane Mayer
Surviving autocracy by Masha Gessen
Democracy in Chains: The Deep History of the Radical Right's Stealth Plan for America by Nancy MacLean
6 more
Midnight in Chernobyl : the untold story of the world's greatest nuclear disaster by Adam Higginbotham
Strangers in their own land : anger and mourning on the American right by Arlie Russell Hochschild
These Truths by Jill Lepore
Behave: The Biology of Humans at Our Best and Worst by Robert M. Sapolsky
We Were Eight Years In Power by Ta-Nehisi Coates
White rage : the unspoken truth of our racial divide by Carol Anderson
Fewer