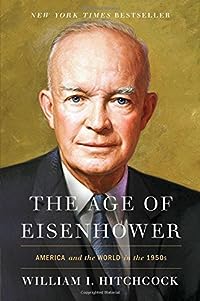 The Age of Eisenhower

by William I. Hitchcock

NEW YORK TIMES BESTSELLER "A page-turner masterpiece." --Jim Lehrer In a 2017 survey, presidential historians ranked Dwight D. Eisenhower fifth on the list of great presidents, behind the perennial top four: Lincoln, Washington, Franklin D. Roosevelt, and Teddy Roosevelt. Historian William Hitchcock shows that this high ranking is justified. Eisenhower's accomplishments were enormous, and loom ever larger from the vantage point of our own tumultuous times. A former general, Ike kept the peace: he ended the Korean War, avoided a war in Vietnam, adroitly managed a potential confrontation with China, and soothed relations with the Soviet Union after Stalin's death. He guided the Republican Party to embrace central aspects of the New Deal like Social Security. He thwarted the demagoguery of McCarthy and he advanced the agenda of civil rights for African Americans. As part of his strategy to wage, and win, the Cold War, Eisenhower expanded American military power, built a fearsome nuclear arsenal and launched the space race. In his famous Farewell Address, he acknowledged that Americans needed such weapons in order to keep global peace--but he also admonished his citizens to remain alert to the potentially harmful influence of the "military-industrial complex." From 1953 to 1961, no one dominated the world stage as did President Dwight D. Eisenhower. The Age of Eisenhower is the definitive account of this presidency, drawing extensively on declassified material from the Eisenhower Library, the CIA and Defense Department, and troves of unpublished documents. In his masterful account, Hitchcock shows how Ike shaped modern America, and he astutely assesses Eisenhower's close confidants, from Attorney General Brownell to Secretary of State Dulles. The result is an eye-opening reevaluation that explains why this "do-nothing" president is rightly regarded as one of the best leaders our country has ever had.… (more)

LibraryThing member rivkat
Mostly notable to me for really driving home that when most white Americans talk about what “Americans” believe, they mean “white Americans.” Hitchcock really likes Eisenhower, especially as moral leader of the country, even while acknowledging Eisenhower’s at best grudging acceptance of desegregation—the domestic moral issue of his time.… (more)
4 more
LibraryThing member buffalogr
This audio book is 25+ hours long and it's drudgery to listen...you have to REALLY want to learn something about Ike when you read this book.. I got bored with the political discussions and multiple characters who walked on and off stage. I put this in the category of DNF after about six hours.
LibraryThing member Pharmacdon
“Those who cannot remember the past are commended to read about it.” (Don Scaggs, 2018)
In a 2017 survey, presidential historians ranked Dwight D. Eisenhower fifth on the list of great presidents. After reading this book, I understand why.
He ended the Korean war.
Avoided involvement in Viet Nam. (France wanted military help at the time).
Stood up to China as it attacked some of the islands off Taiwan. (Military leaders wanted to use atom bombs on China)
Established NASA in order to move the space program from the military.
Called in experts in science and technology on improving military arsenal and space program.
Try to pass a civil rights bill, but was essentially defanged by none other than Lyndon Johnson.
Had an Attorney General that was active in civil rights
Earl Warren added to Supreme Court, which led to Brown v. Board of Education decision
Stability in economics where he avoided government debt. Low unemployment, increase in wages.
Also a few missteps such as the U2 plane being shot down. (He was strongly against such flights, but his CIA director hounded him for one more fly over of Russia.)
Also CIA was involved in overthrow of some government leaders, unfortunately the CIA back the wrong horse, who was usually worse than the originally leader. A lot of complicated events going on in the world at this time. Anticommunism was high on everyone’s list in foreign affairs.
One can’t say anticommunist without mentioning the McCarthy. Ike ignored McCarthy as much as possible, who eventually fell on his own sword and was censured by the Senate.
Many more things going on behind the scenes, which the public and his political rivals could not see.
I highly recommend this book.… (more)
LibraryThing member rhbouchard
Strange book. He spends 95% of it showing how Eisenhower screwed things up and then sweeps it all away with a few paragraphs at the end.
LibraryThing member DanJlaf
Excellent Look at Ikes presidency, Some interesting aspects such as his threat to expand war into China with nukes..
Fewer