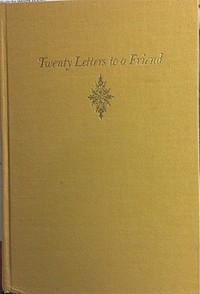 Twenty letters to a friend

"In this riveting, New York Times-bestselling memoir--first published by Harper in 1967--Svetlana Alliluyeva, subject of Rosemary Sullivan's critically acclaimed biography, Stalin's Daughter, describes the surreal experience of growing up in the Kremlin in the shadow of her father, Joseph Stalin. Svetlana Iosifovna Alliluyeva, later known as Lana Peters, was the youngest child and only daughter of Joseph Stalin and Nadezhda Alliluyeva, his second wife. In 1967, she fled the Soviet Union for India, where she approached the U.S. Embassy for asylum. Once there, she showed her CIA handler something remarkable: A personal memoir about growing up inside the Kremlin that she'd written in 1963. The Indian Ambassador to the USSR, whom she'd befriended, had smuggled the manuscript out of the Soviet Union the previous year--and returned it to her as soon as she arrived in India. Structured as a series of letters to a 'friend'--Svetlana refused to identify him, but we now know it was her close friend, Fyodor Volkenstein--this astounding memoir exposes the dark human heart of the Kremlin. After opening with Stalin's death, Svetlana returns to her childhood. Each letter adds a new strand to her remarkable story; some are wistful--romanticized recollections of her early years and her family--while others are desperate exorcisms of the tragedies that plagued her, such as her mother's suicide and her father's increasing cruelty. It is also in some ways a love letter to Russia, with its ancient heritage and spectacularly varied geography. Candid, surprising, and utterly compelling, Twenty Letters to a Friend offers one of the most revealing portraits of life inside Stalin's inner circle, and of the notorious dictator himself"--"Keynote: To coincide with the paperback publication of Rosemary Sullivan's critically-acclaimed biography of Svetlana Alliluyeva, Stalin's Daughter, we are reissuing the first of two books Svetlana published with Harper; released in 1967, her memoir Twenty Letters to a Friend focuses on her life in the Kremlin, under the shadow of her father, Josef Stalin"--… (more)