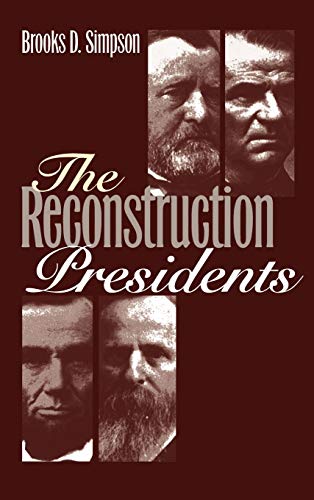 During and after the Civil War, four presidents faced the challenge of reuniting the nation and of providing justice for black Americans--and of achieving a balance between those goals. This first book to collectively examine the Reconstruction policies of Abraham Lincoln, Andrew Johnson, Ulysses S. Grant, and Rutherford B. Hayes reveals how they confronted and responded to the complex issues presented during that contested era in American politics. Brooks Simpson examines the policies of each administration in depth and evaluates them in terms of their political, social, and institutional contexts. Simpson explains what was politically possible at a time when federal authority and presidential power were more limited than they are now. He compares these four leaders' handling of similar challenges--such as the retention of political support and the need to build a Southern base for their policies--in different ways and under different circumstances, and he discusses both their use of executive power and the impact of their personal beliefs on their actions. Although historians have disagreed on the extent to which these presidents were committed to helping blacks, Simpson's sharply drawn assessments of presidential performance shows that previous scholars have overemphasized how the personal racial views of each man shaped his approach to Reconstruction. Simpson counters much of the conventional wisdom about these leaders by persuasively demonstrating that considerable constraints to presidential power severely limited their efforts to achieve their ends. The Reconstruction Presidents marks a return to understanding Reconstruction based upon national politics and offers an approach to presidential policy making that emphasizes the environment in which a president governs and the nature of the challenges facing him. By showing that what these four leaders might have accomplished was limited by circumstances not easily altered, it allows us to assess them in the context of their times and better understand an era too often measured by inappropriate standards.… (more)

Copperheads: The Rise and Fall of Lincoln's Opponents in the North by Jennifer L. Weber
The Tragic Era: The Revolution after Lincoln by Claude Gernade Bowers
Ulysses S. Grant : triumph over adversity, 1822-1865 by Brooks D. Simpson
Lincoln's Emancipation Proclamation : The End of Slavery in America by Allen C. Guelzo
The Fate of Liberty: Abraham Lincoln and Civil Liberties by Mark E. Neely
3 more
But there was no peace : the role of violence in the politics of Reconstruction by George C. Rable
Personal memoirs by Caleb Carr
Memoirs and selected letters : personal memoirs of U.S. Grant, selected letters 1839-1865 by Mary Drake McFeely
Fewer