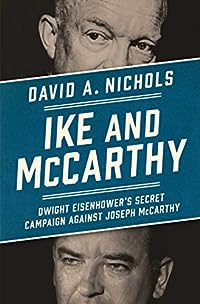 by David A. Nichols

"In January 1954 Senator Joseph McCarthy was one of the most powerful members of the U.S. Senate. By the end of that year he had been censured by his colleagues, and his power was shattered. Ike and McCarthy is the dramatic story of how President Dwight Eisenhower worked behind the scenes to make this happen. When Eisenhower took office in January 1953, anticommunist fervor was at a fever pitch. The loudest voice was McCarthy's, charging that the government was riddled with communist spies. Ike thought that McCarthy's accusations were dangerously irresponsible, but in 1953 he had other priorities, including ending the Korean War. Commentators and pundits blasted Eisenhower for not confronting McCarthy, but the president believed that challenging McCarthy directly would only enhance the senator's reputation. However, when McCarthy launched an investigation into communists in the army, Eisenhower, who had spent most of his life in the army, knew he would not be exempt from McCarthy's attacks. David A. Nichols tells the riveting and little-known story of how Eisenhower and his advisers carefully plotted their successful effort to diminish McCarthy's influence. Eisenhower was not above exploiting personal information about McCarthy's chief counsel Roy Cohn's relationship with army private G. David Schine. When Ike learned that Cohn had repeatedly sought special privileges for Schine, the White House instigated an investigation into whether McCarthy had exercised improper influence on Schine's behalf. The resulting report by the army, which concealed the White House's role, ignited a political firestorm that resulted in the Army-McCarthy hearings. Those hearings, lasting two months, exposed McCarthy's tactics to the public through the new medium of television. That was McCarthy's downfall, covertly manipulated by Eisenhower and his closest advisers. While others played a part, Dwight Eisenhower's secret role in McCarthy's destruction is a seminal story in American political history. Nichols has drawn on thousands of McCarthy-related documents in the Eisenhower Presidential Library archives that Ike ordered a subordinate to collect, as well as other declassified documents, to tell this gripping story of a classic Washington power struggle."--Jacket.… (more)