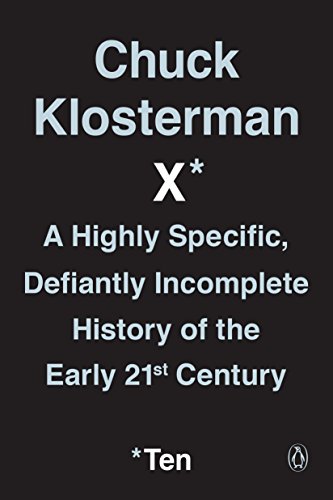 "New York Times-bestselling author and cultural critic Chuck Klosterman compiles and contextualizes the best of his articles and essays from the past decade. Chuck Klosterman has created an incomparable body of work in books, magazines, newspapers, and on the Web. His writing spans the realms of culture and sports, while also addressing interpersonal issues, social quandaries, and ethical boundaries. Klosterman has written nine previous books, helped found and establish Grantland, served as the New York Times MagazineEthicist, worked on film and television productions, and contributed profiles and essays to outlets such asGQ, Esquire,Billboard, The A.V. Club, andThe Guardian. Chuck Klosterman's tenth book (akaChuck Klosterman X) collects his most intriguing of those pieces, accompanied by fresh introductions and new footnotes throughout. Klosterman presents many of the articles in their original form, featuring previously unpublished passages and digressions. Subjects include Breaking Bad, Lou Reed, zombies, KISS, Jimmy Page, Stephen Malkmus, steroids, Mountain Dew, Chinese Democracy, The Beatles, Jonathan Franzen, Taylor Swift, Tim Tebow, Kobe Bryant, Usain Bolt, Eddie Van Halen, Charlie Brown, the Cleveland Browns, and many more cultural figures and pop phenomena. This is a tour of the past decade from one of the sharpest and most prolific observers of our unusual times"--… (more)

LibraryThing member BenKline
I always enjoy Chuck Klosterman's collections of essays. His way of looking at pop culture and how he interprets it and consumes it into his own thoughts is always very reminiscent to how myself (and by extension my friends that I discuss pop culture with) do as well. He seems to have similar idioms and thought processes and habits that I have, which makes reading him far more enjoyable - than maybe it should be or that it would be to others?, I'm not sure - so that helps me internalize what I'm reading with him.

This collection is mostly essays and some interviews. The interviews were interesting for the time pieces and the persons he was interviewing (Tom Brady, Kobe Bryant, Taylor Swift, etc.). Some of the essays - in regards to things of a pop culture and political sense on a whole - were pretty good. Some of his essays on music (since I'm not a huge music 'mark') fell a bit on death ears outside of the music I listen to (rock in a mainstream sort of way).

This took me far longer to finish than it should have though and was a bit of a slog, but it's probably his biggest collection of essays/works in one volume though too. But still definitely worth the read, especially for any Kolsterman fan.… (more)

We Were Eight Years In Power by Ta-Nehisi Coates
The parade : a novel by Dave Eggers
The Kandy-Kolored Tangerine-Flake Streamline Baby by Tom Wolfe