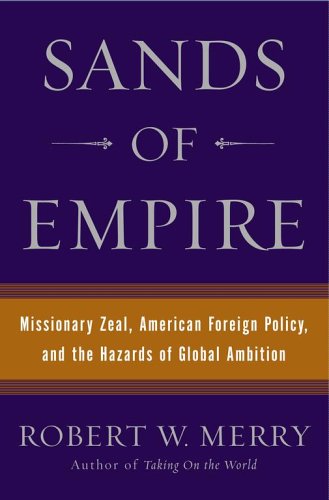 InSands of Empire,veteran political journalist and award-winning author Robert W. Merry examines the misguided concepts that have fueled American foreign policy since the end of the Cold War. The emergence in the George W. Bush administration of America as Crusader State, bent on remaking the world in its preferred image, is dangerous and self-defeating, he points out. Moreover, these grand-scale flights of interventionism, regime change, and the use of pre-emptive armed force are without precedent in American history.Merry offers a spirited description of a powerful political core whose ideas have replaced conservative reservations about utopian visions -- these neocons who "embrace a brave new world in which American exceptionalism holds sway," imagining that others around the globe can be made to abandon their cultures in favor of our ideals. He traces the strains of Wilsonism that have now merged into an adventurous and hazardous foreign policy, particularly as described by William Kristol, Francis Fukuyama, Max Boot, and Paul Wolfowitz, among others. He examines the challenge of Samuel Huntington's supposition that the clash of civilizations defines present and future world conflict. And he rejects the notion ofThe New York Times'sThomas L. Friedman that America is not only the world's role model for globally integrated free-market capitalism, but that it has a responsibility to foster, support, and sustain globalization worldwide.From the first president Bush to Clinton to the second Bush presidency, the United States has compromised its global leadership, endangered its security, and failed to meet the standard of justified intervention, Merry suggests. The country must reset its global strategies to protect its interests and the West's, to maintain stability in strategic areas, and to fight radical threats, with arms if necessary. For anything less than these necessities, American blood should remain in American veins.… (more)

LibraryThing member vpfluke
This is quite a review of United States foreign policy over the last century. I am not sure that I always agree with Robert Merry, the publisher of Congressional Quarterly, but his numerous alternate perceptions and insights are good to read.

He first contrasts the idea of progress versus the idea of cylces in looking at where the world's history is going. The cyclical view is exemplified by Oswald Spengler and Arnold Toynbee. But not everyone has read them. During the 1990's the idea of the end of history came about through Francis Fukyama, much to our detriment. The popular version was taken up by Thomas Friedman of the New York Times. The alternative to this is that of Samuel Huntingtn and the Clash of Civilizations. Merry is definitely in the latter's camp.

Then Merry's expresses the five modalities of the United Sates response to what should be done in the world beyond its borders.

1. The expansionism of Theodore Roosevelt, a variant of European colonialism. this didn't really take hold for any length of time in the 20th century.
2. Liberal or humaitarian interventionism, where the U.S. has a moral imperative to brings its values to the rest of the world. The second Bush and neo-conservatives were in this camp.
3. Conservative isolationism, to keep the U.S. out of a corrupt world, and certainly was preeminent in the late 1930's in the U.S.
4. Liberal isolationism, which sees the rest of the world as better than the corrupt U.S. and had sway among leftists in the 1960's and 1970's, because of the war in Vietnam.
5. Conservative interventionism, where the U.S. must play a major world roll to protect its interests. This sees the Kosovo intervention during the Clinto administration. as a bad policy.

Merry is not sure that the U.S. should further humanitarian policies because it brings so much trouble for us. The problem for me is that many Americans really do believe in the values of American democracy and would like to see them spread or adopted. Taking the middle ground is very hard to do. But I do agree that the U.S. as a nation can be blinded by its zeal, and we need to reguarly step back and take stock of the real situation.… (more)

An End to Evil: How to Win the War on Terror by David Frum
America at the crossroads : democracy, power, and the neoconservative legacy by Francis Fukuyama
Promised Land, Crusader State: The American Encounter with the World Since 1776 by Walter McDougall
Nixon and Kissinger : partners in power by Robert Dallek