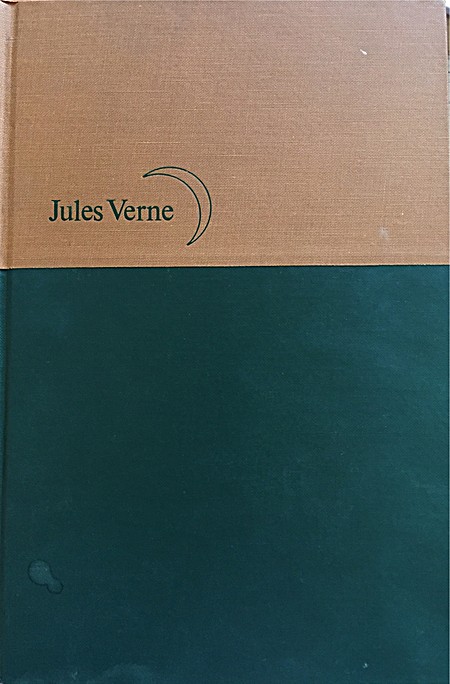 From the Earth to the Moon and Around the Moon

With an Introduction and Notes by Alex Dolby. Translation by T.K. Linklater Jules Verne (1828-1905) was internationally famous as the author of novels based on 'extraordinary voyages.' His visionary use of new travel technologies inspired his readers to look to the industrial future rather than the remote past for their dreams of adventure. The popularity of his novels led directly to modern science fiction. In 'From the Earth to the Moon and Around the Moon', Jules Verne turned the ancient fantasy of space flight into a believable technological possibility - an engineering dream for the industrial age. Directly inspired by Verne's story, enthusiasts worked successfully at overcoming the practical difficulties, and within a century, human beings did indeed fly to the Moon. Curiously, however, Verne is unlikely to have thought it possible that a manned projectile could actually be fired out of a giant cannon, rising higher than the Moon, swinging around it, and then landing safely back on Earth. He had used the science of the day to construct a literary conjuring trick, a hoax, one of the most successful in all history. By skilful misdirection he drew the attention of readers away from weaknesses in the project. Read the book and you, too, will be fooled into accepting the realistic possibility in Verne's time of that dream of flying to the Moon. AUTHOR: Jules Verne (1828 -1905) is a French author who, although he did not invent Science Fiction, was probably the most influential writer in the genre. Although basing many of his ideas on the latest technological advances of his time, his invention was so meticulous as to be totally convincing. His novels, such 'Twenty Thousand Leagues under the Sea' and 'Journey to the Centre of Earth' are classics of enduring popularity.… (more)

LibraryThing member john257hopper
This contemporary translation by Edward Roth is more entertaining than the other version of Journey to the Moon I have read and reviewed on LT (which though described as unabridged, was only two thirds of the length of this one). There are still large parts of these stories that are dry and technical and the sense of exuberance and naivety exhibited by the characters is quite hilarious and a bit wearing in the post-space age era. Worth reading as an example of 19th century SF adventure rather than anything else, perhaps.… (more)
4 more
LibraryThing member jkauk
The Baltimore Gun Club decides the next target they will be shooting at will be the moon. They club sends a notice to the town to help them earn money to build a gun big enough to reach the moon from the earth. A scientist named Nicholl challenges them saying they cannot accomplish this feat. He tells them he is going on a trip to the moon to study parts of the moon. The Gun Club decides they will need his wisdom in helping build the gun. They Club and Nicholl team up and build a space shuttle to send them to the moon. They are sent into outer space and get stuck in the moon’s orbit. The men must get out of the orbit to land on the moon, so they turn the rockets on hoping to exit the orbit. However the men are sent flying back to earth and land in the ocean. A ship crew see’s the shuttle crash in the sea and gather a search party to find the men. The search party eventually finds the men but have no new information about the moon.

I am not a fan of science and this book had a lot of science facts in it. I thought the material was dry and hard to get through.

One activity used with this book would to be having students read this book when discussing outer space and the moon. Another activity used with this book would be to have the kids compare and contrast this space shuttle to the space shuttles created by NASA.… (more)
LibraryThing member mullinator52
While it is an interesting scientific predictor, the book bogs down frequently with many calculations and much discussion of theories about the moon from that time.
LibraryThing member jen.e.moore
This is only about 25% a novel (or really two novels), and 75% an excuse to show off calculations and scientific knowledge. Then again, this is hardly the first science fiction novel I've read with that problem. If there are any characters, my favorite character is J.T. Marston, over-enthusiastic, clumsy, ridiculous, and generally very endearing.… (more)
LibraryThing member baswood
Originally published in instalments in the popular Parisien newspaper (Journal des débats politiques et llttéraires) between September and October 1865 after the more famous Journey to the Centre of the Earth a year earlier. The Encyclopedia of Science Fiction claims that Verne was one of the two pre-eminent authors in the field of science fiction in the nineteenth century the other being H G Wells. Verne wrote his From the Earth to the Moon some 36 years before Wells’ First Men in the Moon and easily beats it for scientific facts and figures and while Verne might not have had the literary style of Wells he still paints an effective portrait of America just at the end of the Civil War. It is a portrait laced with satire and while the straightforward plot bears no deviation from its title (not a single female character) it still manages to hugely entertain.

The novel opens with a meeting of the American Gun Club in Baltimore and its members are worried about the future, The war has ended, nobody is using artillery, nobody is ordering guns, arms manufactures are losing money: what can be done. The members explore the possibilities of a new war, of wars in foreign countries, but everyone is at peace; something must be done. Its president Impey Barbicane comes up with an idea that will save the club, they will oversee the production of a massive gun that will fire a shell from the earth to the moon. When he announces the new project he is carried shoulder high around the town as the whole of America is gripped with moon fever. Much of the first part of the novel concerns the logistics of building the canon and disputes over the calculation of distances, range and dimensions. Then a telegram is received from Paris sent by Michel Arden who says he is on his way to America and wants the shape of the bullet changed so that it can be hollowed and they can travel inside to the moon. Arden arrives he is a larger than life character and Verne uses him to satirise the french. Arden we learn is a “breaker of windows” an adventurous, courageous, proud man who has no time for details. His enthusiasm matches the Americans and soon they are in agreement to travel together to the moon.

I read the Livre de Poche edition which features 41 illustrations by Henri de Montaut which captures the text superbly and heightens the satire. The illustration of the inner circle of the gun club shows them all with crutches, wooden appendages, hooks instead of hands and steel plated craniums. The pictures of Michel Arden who towers over the Americans are brilliant and really I found myself lost in the details of these pen and ink drawings. Jules Verne’s parodies of Americans and French make great characters, the English it appears are beneath contempt hardly worth the bother as they pour cold water on the magnificent adventure. Part of the interest in reading science fiction before it was called science fiction is to check off the more accurate predictions of the future and Verne seems to have known enough science to make a reasonable stab. Of interest to me was the devastation caused to the earth and its atmosphere by the firing of the huge gun, this was an unexpected consequence of the gung-ho adventurers. Verne’s mix of science, adventure and humour which sometimes turns black hit the right note for me and I am looking forward to reading more of his ‘Voyages extraordinaires 4 stars.… (more)
Fewer

The Master of Ballantrae by Robert Louis Stevenson