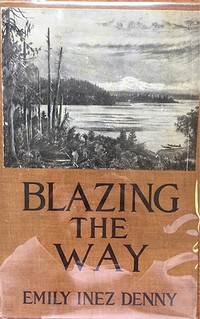 Blazing the way; or, True stories, songs and sketches of Puget Sound and other pioneers

Excerpt: ... a dense forest down to the waters edge, and had at that time, in the Pg 262 spring of 1852, only three cabins, namely: C. D. Borens, the brides brother; W. N. Bells and A. A. Dennys. Borens stood where now stands the Merchants National Bank, and Bells was near the foot of Battery Street. "At first the forests were so dense that the only means of communication was along the beach at low tide; after three or four months, a trail was beaten between the three cabins. David lived with his brother, but he built himself a cabin previous to his marriage, near the foot of Denny Way, near and north of Bells house. To this lonely cabin in the woods, he took his bride and they lived there until August, 1853, eking out an existence like the other pioneers, chopping wood, cutting piles for shipment, living on anyhow, but always managing to have enough to eat, such as it was, with plenty of pure spring water. "In August, of 1853, he built a cabin on the spot where now the Frye Block stands and they passed the winter of 1853 there. "In the spring of 1854 he built another cabin further east on the donation claim, east of what is now Box Street, between Mercer and Republican, and they moved into it, remaining there until near the time of the Indian outbreak. "Mr. Denny had acquired a knowledge of the various Indian dialects, and through this learned much of the threatened outbreak, and moved his family in time back to the house on the Frye Block site, which was also near the stockade or Pg 263 fort that stood at the foot of Cherry Street. During the greater part of the winter of 1855 the women in the settlement lived in the fort, and Mrs. Denny passed much of the time there. "After the Indian trouble was over the Dennys moved out again to their outside cabin. The Indians making the trouble were the Swunumpsh and the Klickitats, from east of the mountains; the Sound...… (more)