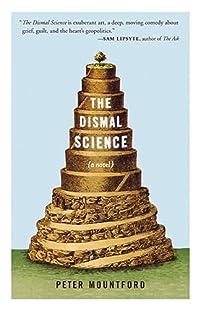 The dismal science : a novel

"The Dismal Science tells of a middle-aged vice president at the World Bank, Vincenzo D'Orsi, who publicly quits his job over a seemingly minor argument with a colleague. A scandal inevitably ensues, and he systematically burns every bridge to his former life. After abandoning his career, Vincenzo, a recent widower, is at a complete loss as to what to do with himself. The story follows his efforts to rebuild his identity without a vocation or the company of his wife. An exploration of the fragile nature of identity, The Dismal Science reveals the terrifying speed with which a person's sense of self can be annihilated. It is at once a study of a man attempting to apply his reason to the muddle of life and a book about how that same ostensible rationality, and the mathematics of finance in particular, operates-with similarly dubious results-in our world. "--… (more)