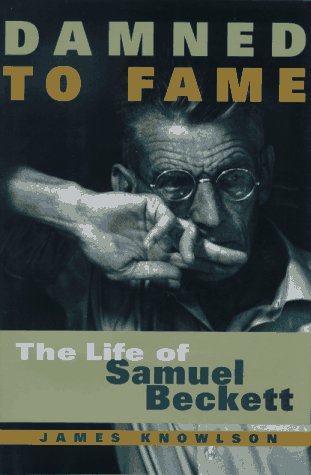 Damned to fame : the life of Samuel Beckett

Damned to Fame follows the reclusive literary giant's life from his birth in Foxrock, a rural suburb of Dublin, in 1906 to his death in Paris in 1989. Knowlson brilliantly re-creates Beckett's early years as a struggling author in Paris, his travels through Germany in 1936-37 as the Nazis were consolidating their power, his service in the French Resistance during World War II, and the years of literary fame and financial success that followed the first performance of his controversial Waiting for Godot (1953).Paris between the wars was a city vibrant with experimentation, both in the arts and in personal lifestyle, and Knowlson introduces us to the writers and painters who, along with the young Beckett, populated this bohemian community. Most notable was James Joyce, a fellow Irishman who became Beckett's friend and mentor and influenced him to devote his life to writing. We also meet the women in Beckett's life - his domineering mother, May; his cousin Peggy Sinclair, who died at a tragically young age; Ethna MacCarthy, his first love, whom he immortalized in his poetry and prose; Peggy Guggenheim, the American heiress and patron of the arts; and the strong and independent Suzanne Deschevaux-Dumesnil, whom he met in the late 1930s and married in 1961.Beyond recounting many previously unknown aspects of the writer's life, including his strong support for human rights and other political causes, Knowlson explores in fascinating detail the roots of Beckett's works. He shows not only how the relationship between Beckett's own experiences and his work became more oblique over time, but also how his startling postmodern images were inspired by the paintings of the Old Masters, such as Antonello da Messina, Durer, Rembrandt, and Caravaggio.… (more)

LibraryThing member iayork
A Thorough, Passionate, and Scholarly Work: If the scale permitted, I would give Knowlson's biography of Samuel Beckett 4 1/2 stars. It is an impressively thorough, passionate, and scholarly work by an ardent admirer. Knowlson's ardor for Beckett, the man no less than the work, is everywhere evident as a predominant strength and an odd occasional weakness. I could not help feeling, every now and then, that it pained Knowlson greatly to have to write anything negative about Beckett. As a biography, it is less emotionally detached than I usually like, but only slightly. It was a compelling read, all 618 pages, which is saying alot.… (more)