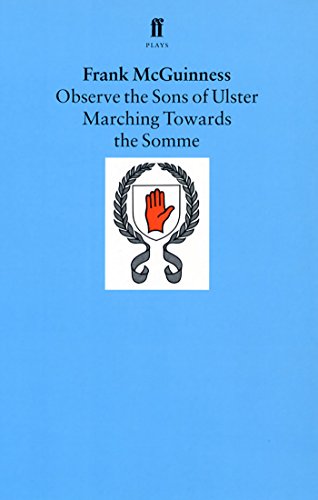 Observe the sons of Ulster marching towards the Somme

'This powerful and subtle play... follows the experience of eight men who volunteer to serve in the 36th (Ulster) Division at the beginning of the First World War. It reaches a climax at the start of the terrible battle of the Somme on July 1, 1916, the actual anniversary of the battle of the Boyne in 1690. The Somme, where the Ulster Division suffered heavy casualties, has, like the Boyne, come to have a sacred place in the Loyalist Protestant mind. It marks the Union sealed with blood. It stands for the ultimate test of Ulster's loyalty; a blood-sacrifice to match any made by Irish nationalists.' Times Literary Supplement Observe the Sons of Ulster Marching Towards the Somme was revived by the Abbey Theatre, Dublin, in 1994 as part of an acknowledgement of the peace process. The production was subsequently taken to the Edinburgh Festival in 1995 and opened at the Royal Shakespeare Company's Barbican Theatre, London, in March 1996.… (more)