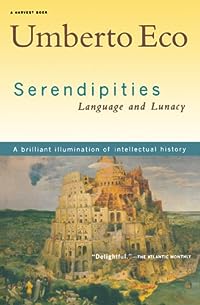 Best-selling author Umberto Eco's latest work unlocks the riddles of history in an exploration of the "linguistics of the lunatic," stories told by scholars, scientists, poets, fanatics, and ordinary people in order to make sense of the world. Exploring the "Force of the False," Eco uncovers layers of mistakes that have shaped human history, such as Columbus's assumption that the world was much smaller than it is, leading him to seek out a quick route to the East via the West and thus fortuitously "discovering" America. The fictions that grew up around the cults of the Rosicrucians and Knights Templar were the result of a letter from a mysterious "Prester John"--undoubtedly a hoax--that provided fertile ground for a series of delusions and conspiracy theories based on religious, ethnic, and racial prejudices. While some false tales produce new knowledge (like Columbus's discovery of America) and others create nothing but horror and shame (the Rosicrucian story wound up fueling European anti-Semitism) they are all powerfully persuasive. In a careful unraveling of the fabulous and the false, Eco shows us how serendipities--unanticipated truths--often spring from mistaken ideas. From Leibniz's belief that the I Ching illustrated the principles of calculus to Marco Polo's mistaking a rhinoceros for a unicorn, Eco tours the labyrinth of intellectual history, illuminating the ways in which we project the familiar onto the strange. Eco uncovers a rich history of linguistic endeavor--much of it ill-conceived--that sought to "heal the wound of Babel." Through the Middle Ages and the Renaissance, Greek, Hebrew, Chinese, and Egyptian were alternately proclaimed as the first language that God gave to Adam, while--in keeping with the colonial climate of the time--the complex language of the Amerindians in Mexico was viewed as crude and diabolical. In closing, Eco considers the erroneous notion of linguistic perfection and shrewdly observes that the dangers we face lie not in the rules we use to interpret other cultures but in our insistence on making these rules absolute. With the startling combination of erudition and wit, bewildering anecdotes and scholarly rigor that are Eco's hallmarks, Serendipities is sure to entertain and enlighten any reader with a passion for the curious history of languages and ideas.… (more)

LibraryThing member princemuchao
Eco starts out strong with the essay The Force of Falsity, easily the best selection in this collection of five articles on serendipity and language. Unfortunately, the essays that follow it become tedious and will probably not be very interesting to anyone that is not schooled thoroughly in
Show More
linguistics.

In The Force of Falsity Eco points out that falsity, as well as truth, has shaped the world in important ways, using many interesting examples including Columbus, Prester John and the Rosicrucians.

Languages in Paradise is an essay examining Dante’s beliefs about the language of Adam and the effects of Babel upon it. I can’t imagine a popular audience finding this interesting, or even wholly comprehensible.

The final two essays are criticisms of linguistic academics – one pertaining to Foigny’s burlesque perfect language and the final deeply critical of Joseph De Maistre’s linguistics.

I can’t recommend this book to anyone who is not studying linguistics. If you are a huge fan of Eco’s nonfiction, I suggest you read the first and third essays and skim the others to see if anything catches your interest.
Show Less
7 more
LibraryThing member bragan
A collection of essays about various historical ideas on the subject of language. The first essay, "The Force of Falsity" is actually about false ideas which have had significant impacts on history and culture in general, but that certainly applies to a lot of the language-related concepts he talks
Show More
about in the rest of the book. The second, "Languages in Paradise," is mostly about the search for the language supposedly spoken by Adam in the Garden of Eden, with particular attention to what Dante had to say on the subject. Number three, "From Marco Polo to Leibniz," is about European misconceptions about Egyptian hieroglyphics and Chinese pictograms. Number four, "The Language of the Austral Land," looks at the idea of artificial languages constructed so as to be self-evidently based on the logic of reality, mainly by means of examining a parody version. And the last, "The Linguistics of Joseph de Maistre" is a detailed takedown of one particular person's mystical view of the origin and evolution of language.

It's kind of an odd little book, really. Eco doesn't seem especially interested in giving a broad overview of his topic, but rather on poking into the specific little corners of it that interest him. It is, on the whole, probably a bit more detailed, dense and scholarly than I'd have preferred. I found that whenever his topic was something I already had some familiarity with, I got a fair bit out of it and appreciated Eco's thoughts and insights, and whenever he touched on subjects I had little knowledge of, I got a little lost.
Show Less
LibraryThing member danielbeattie
Not a bad little book. 5 essays about the quest for the language of paradise. The essay on Dante was particularly interesting. Only for the linguistically inclined.
LibraryThing member palaverofbirds
As exciting as semiotics can get! Eco is both a story-teller and a scholar, and in everything I've read by him there's a little of both regardless if the work is fiction or non-fiction.
LibraryThing member HadriantheBlind
Interesting little book of Eco's lectures on language and some historical concepts. They vary in quality, but still are worth looking at if you have the time.
LibraryThing member steller0707
Umberto Eco is best known for his book, "The Name of the Rose" which was made into a movie starring Sean Connery. He was, however, a literary critic and university professor. For this book, he has his philosopher's hat on.

It is a fascinating collection of five essays about language revised from
Show More
lectures Eco gave in the 1990s. The lectures can be read separately, but they are related and make a good set. In them, Eco speculates on aspects of language, including the efforts over the ages to search for an original Hebrew, language of Adam; the evolution of language through misunderstandings, conquests and exchange; creation of a universal dictionary (much like the universal language of mathematics). Although there is much to absorb here, Eco's arguments are well laid out with broad cultural references, and beautifully written.
Show Less
LibraryThing member jonfaith
Somewhere in an earlier Alomodovar film, maybe Flower of the Secret, a character describes a scenario for a film, one which actually A would eventually create as Volver. I really like that, the inclusion. Eco anticipates his Cemetery of Prague with a devilish delight in this one, little surprise as
Show More
nearly all of PC, outside of the protagonist, is grounded in historical evidence. I liked this dizzying book, though the final section did leave me grasping, if not gasping.
Show Less
LibraryThing member JasonRiedy
I'm an academic. Some of these are derived from his lectures? I strive to attain Eco's level of scholarship.
Fewer