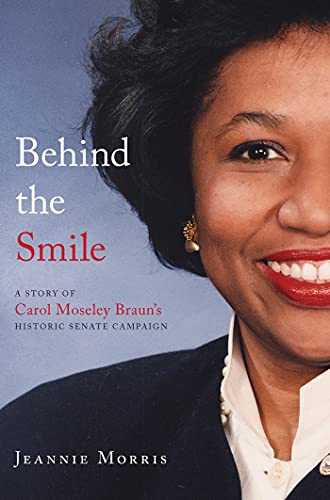 Behind the smile : a Story of Carol Moseley Braun's Historic Senate Campaign

"In 1992, Carol Moseley Braun became the first, and to this day only, African-American woman elected to the US Senate. Long before this historic victory, which Barack Obama would later say prefigured his own path to the Senate and presidency, veteran Chicago journalist Jeannie Morris saw an incredible opportunity. Here was a bold and politically courageous candidate, a feminist and sensible progressive with whom Morris quickly identified on a personal level. Morris joined the campaign to write the official story of a brilliant retail politician with a charismatic smile. What happened next resulted in a story that went well beyond what Morris could have imagined. Behind the Smile is the riveting campaign-trail memoir of a journalist coming to grips with the shortcomings of an ascendant politician -- a charismatic trailblazer whose personal relationship with a key staffer led to her undoing. The narrative unfolds as the personal journey of a sympathetic reporter reconciling her own belief in an inspiring figure with her responsibility to deliver the facts. In Behind the Smile, Morris brings the social and political impact of Moseley Braun's story -- from her meteoric rise to her eventual downfall -- into clear focus"-- "Memoir by a Chicago journalist recounting the 1992 US Senate campaign of Carol Moseley Braun"--… (more)