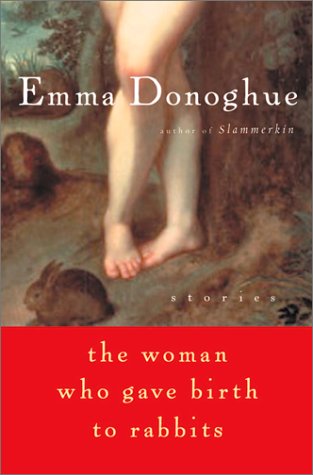 the woman who gave birth to rabbits : stories

The Woman Who Gave Birth to Rabbits is a book of fictions, but they are also true. Over the last ten years, I have often stumbled over a scrap of history so fascinating that I had to stop whatever I was doing and write a story about it. My sources are the flotsam and jetsam of the last seven hundred years of British and Irish life: surgical case-notes; trial records; a plague ballad; theological pamphlets; a painting of two girls in a garden; an articulated skeleton. Some of the ghosts in this collection have famous names; others were written off as cripples, children, half-breeds, freaks and nobodies. The Woman Who Gave Birth to Rabbits is named for Mary Toft, who in 1726 managed to convince half England that she had done just that. So this book is what I have to show for ten years of sporadic grave-robbing, ferreting out forgotten puzzles and peculiar incidents, asking 'What really happened?', but also, 'What if?… (more)

LibraryThing member _Zoe_
I enjoyed this book much more than I'd expected to. I often struggle with short story collections because there's no continuous plot thread that makes me want to keep reading, but these stories had a different kind of twist that was almost as good: each one is inspired by an obscure historical fact, and at the end of each story there's a note explaining the historical basis. I found this absolutely fascinating, and I appreciated the stories much more when I could see how Donoghue had crafted them from the tiniest scraps of historical information. I just wish the notes had been longer.… (more)
8 more
LibraryThing member extrajoker
stories: The Last Rabbit / Acts of Union / The Fox on the Line / Account / Revelations / Night Vision / Ballad / Come, Gentle Night / Salvage / Cured / Figures of Speech / Words for Things / How a Lady Dies / A Short Story / Dido / The Necessity of Burning / Looking for Petronilla

For each of the stories in this volume, Donoghue took inspiration from a different historical anecdote, figure, or other detail discovered happenstance while researching something else...which fact she probably includes in her foreword to deflect that writersbane query: "Where do you get your ideas?" In any case, there's some good stuff here, some disturbing (such as "Cured," about historical clitorectomies in the UK) and others genuinely bizarre (such as "The Last Rabbit," about a woman's claims to have birthed several stillborn lapines...hence the title of the book).… (more)
LibraryThing member the_awesome_opossum
The Woman Who Gave Birth to Rabbits is a collection of short stories, inspired by extraordinary snippets from Britain's history. On a superficial level, this is all that connects the stories (oh, along with a sly reference to rabbits in every story). But in a more meaningful way, the stories all raise questions about the shiftiness of history and the characters it entombs (and those it doesn't). Each story is about a woman whose deeds have been almost but not quite forgotten; Donoghue fleshes out the dry annals of history into living people.

My favorite stories were the ones with which readers could make wry modern day comparisons: the captain who drunkenly marries a spinster is reminiscent of an ill-fated Vegas wedding; a woman leading a Rapture-ready cult has numerous cultic counterparts. "The Necessity of Burning," in which a woman is told her dead child will burn in Hell solely because she baptized him "In the name of the Son and Father," rather than Father and Son, has uncomfortable parallels with the unapologetic legalism of some religious people even today. Donoghue brings these marginalized and everyday women, who would have not made it in "real" history, to life as she retells their stories.… (more)
LibraryThing member lesleydawn
These are a bunch of fictionalized stories based on true historical events. Keep that in mind when you read it, and the book suddenly turns from so-so to incredible.
LibraryThing member 50MinuteMermaid
A whimsical yet oddly substantive collection of historical fiction short stories; obscure or long-forgotten women of Ireland and the British Isles whose tales are lightly and maybe even musingly retold via a kind of legitimate fan-fiction.
LibraryThing member markajudd
Lesbian author of short historical monographs.Enjoyed most. Eclectic subject matter and good at dealing with the underclass and drawing on folk-lore subjects.
LibraryThing member elenaj
I'm not generally a short-story person, but I make an exception for Emma Donoghue. This collection (which I must admit to not remembering perfectly -- it's been a while since I read it) takes odd and unlikely from history and turns them into clever and often compelling fiction.
LibraryThing member greeniezona
Have I ever been so in love with a book of short stories as this? The only one I can think of that would come close is Margaret Atwood's Good Bones, but that was less a book of short stories than it was a collection of prose poems and reimagined faerie tales. No, this is it. And Emma Donoghue is a delightful genius. Her writing takes part of what I love best about Jane Austen, colours it with a decidedly feminist sensibility, and mixes in a fascination with obscure historical details, especially those regarding medicine or illness. In truth, I found the first story a little dry, but with each successive story I found myself more and more enamored. By the end I wanted to hug the book to myself, and if I had a bit of money, I have several friends I would love to send off copies of this book to immediately. (Mindy, you are at the top of this list. Go see if your library has this book immediately!)

I would also like to point out that I'm not even particularly fond of short stories. Okay, I loved the Mark Twain stories my father read to me as a child, the Stephen King short stories I was addicted to in high school, then Neil Gaiman's short stories in college, but these are the exception. Most collections of short stories I never finish, rather I limp through two or three, then put the book down somewhere, never to be picked up again. I think the format is much abused, by people who can't be bothered to sustain a plotline long enough to create a novel. But Donaghue's stories are little gems.

What can I say to make you go out and pick up this book? Perhaps that each story is based off of some snippet of historical truth, a note in a ledger, a footnote in a biography of someone else. Some true thing that glimmered and fascinated, but was isolated, and nothing more of that life was known. Donaghue fleshes out these twinklings into stories, into women that we should have known. Passionate women who loved, raged and fought. Women who chose different paths, and women whose paths were chosen for them. All illuminate their time, regardless of how close to truth their stories are. And even better, following each story is a note of the truth behind it, documenting what parts of the story were true, and often how the rest was imagined.

This is one of the finest books I have read in a while. I would add it to Michelle Tea's class of women's experience in literature (read the upcoming bookslut interview to find out what I'm talking about.)… (more)
LibraryThing member csoki637
A collection of short stories, well written and engaging, bringing snippets of untold English/Irish/Scottish history to life. Subtly feminist and some glimpses of queerness from history. I enjoyed Donoghue’s narration and prose very much.

Some quotes I liked:

“Scotland is plague-stricken. Folk wear bruises of mauve and orange and yellow for a few days, and then they die.” (p. 73)