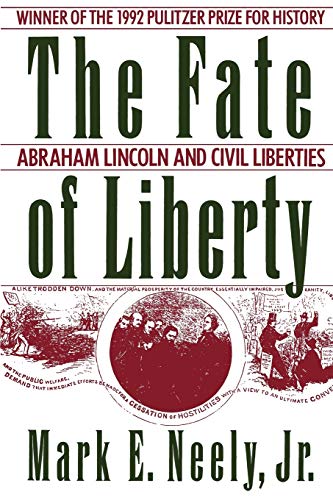 The Fate of Liberty: Abraham Lincoln and Civil Liberties

If Abraham Lincoln was known as the Great Emancipator, he was also the only president to suspend the writ of habeas corpus. Indeed, Lincoln's record on the Constitution and individual rights has fueled a century of debate, from charges that Democrats were singled out for harrassment to Gore Vidal's depiction of Lincoln as an "absolute dictator." Now, in the Pulitzer Prize-winning The Fate of Liberty, one of America's leading authorities on Lincoln wades straight into this controversy, showing just who was jailed and why, even as he explores the whole range of Lincoln's constitutional policies. Mark Neely depicts Lincoln's suspension of habeas corpus as a well-intentioned attempt to deal with a floodtide of unforeseen events: the threat to Washington as Maryland flirted with secession, disintegrating public order in the border states, corruption among military contractors, the occupation of hostile Confederate territory, contraband trade with the South, and the outcry against the first draft in U.S. history. Drawing on letters from prisoners, records of military courts and federal prisons, memoirs, and federal archives, he paints a vivid picture of how Lincoln responded to these problems, how his policies were actually executed, and the virulent political debates that followed. Lincoln emerges from this account with this legendary statesmanship intact--mindful of political realities and prone to temper the sentences of military courts, concerned not with persecuting his opponents but with prosecuting the war efficiently. In addition, Neely explores the abuses of power under the regime of martial law: the routine torture of suspected deserters, widespread antisemitism among Union generals and officials, the common practice of seizing civilian hostages. He finds that though the system of military justice was flawed, it suffered less from merciless zeal, or political partisanship, than from inefficiency and the friction and complexities of modern war. Informed by a deep understanding of a unique period in American history, this incisive book takes a comprehensive look at the issues of civil liberties during Lincoln's administration, placing them firmly in the political context of the time. Written with keen insight and an intimate grasp of the original sources, The Fate of Liberty offers a vivid picture of the crises and chaos of a nation at war with itself, changing our understanding of this president and his most controversial policies.… (more)