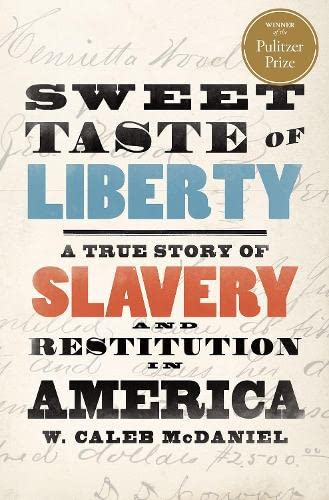 Sweet taste of liberty : a true story of slavery and restitution in America

"In Sweet Taste of Liberty, W. Caleb McDaniel focuses on the experience of a freed slave who was sold back into slavery, eventually freed again, and who then sued the man who had sold her back into bondage. Henrietta Wood was born into slavery, but in 1848, she was taken to Cincinnati and legally freed. In 1855, however, a wealthy Kentucky businessman named Zebulon Ward, who colluded with Wood's employer, abducted Wood and sold her back into bondage. In the years that followed before and during the Civil War, she gave birth to a son and was forced to march to Texas. She obtained her freedom a second time after the war and returned to Cincinnati, where she sued Ward for $20,000 in damages--now known as reparations. Astonishingly, after ten years of litigation, Henrietta Wood won her case. In 1878, a Federal jury awarded her $2,500 and the decision stuck on appeal. While nowhere close to the amount she had demanded, this may be the largest amount of money ever awarded by an American court in restitution for slavery. Wood went on to live until 1912"--… (more)

LibraryThing member aevaughn
This work is about Ward, a slave owner, and Wood, a slave who twice gained and lost her freedom. Caleb in his prologue raises some of the questions coming out of Wood’s case.
Where had men such as Ward gotten all their wealth? Where, for that matter, had the country gotten its riches? And what could the amount that Wood won do for families like hers? What did freedom mean without resitution for slavery?

This enthralling story of Woods a woman who was twice enslaved and twice set free told by Caleb McDaniels. She won a case in federal court against one of her former masters, which gives us some small insight into how reparations might affect communities today. Caleb has brought this story out of the dust by weaving together newspaper accounts and court cases involving Woods.… (more)

We Were Eight Years In Power by Ta-Nehisi Coates
The guarded gate : bigotry, eugenics, and the law that kept two generations of Jews, Italians, and other European immigrants out of America by Daniel Okrent
Dreams of El Dorado : a history of the American West by H. W. Brands
We The Corporations : How American Businesses Won Their Civil Rights by Adam Winkler
Milk of Paradise: A History of Opium by Lucy Inglis
4 more
The New Negro: The Life of Alain Locke by Jeffrey C. Stewart
The Queen: The Forgotten Life Behind an American Myth by Josh Levin
This America : the case for the nation by Jill Lepore
Arc of justice : a saga of race, civil rights, and murder in the Jazz Age by Kevin Boyle
Fewer