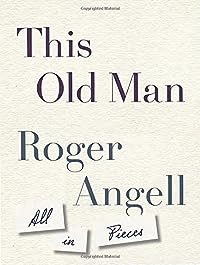 This old man : all in pieces

"From the acclaimed New Yorker writer and editor, a compendium of writings that celebrate the view from the tenth decade of his richly lived life In February 2014, The New Yorker published an essay by Roger Angell called "This Old Man," a meditation on life at age ninety-three. With great humor and not an ounce of self-pity or sentimentality, Angell wrote about health, mind, and memory; reckoning with the past and a long list of friends and family who have died; daily joys and struggles; and, above all, love. Cheerful and beautiful and moving, the piece became an instant classic, won a National Magazine Award, and has been shared and discussed by legions of readers young and old. "This Old Man" is the centerpiece of Angell's new book, which gathers essays, letters, photos, comic verse, and drawings that in aggregate present a kaleidoscopic portrayal of a deeply engaged and vibrant life. Angell's fluid prose and native curiosity make him an amiable and compelling companion on the page. Whether the subject is coping with the loss of his wife, Carol, editing John Updike, the seventh game of the 2014 World Series, his appreciation of fox terriers, or the Fourth of July ceremonies in his summer home in rural Maine, what links the pieces (most of recent vintage) is the deep sense of gratitude that suffuses them. Gratitude for the people he has known, the experiences he's had, the writers and friends and baseball players he admires. It's a portrait of a full and fascinating life, but a portrait always directed generously outward. Angell is New Yorker royalty. Son of Katharine S. White, the first fiction editor ofThe New Yorker, and stepson of E. B. White, Angell wrote his first piece for the magazine in 1944 and was for many years chief fiction editor himself. His affectionate take on the magazine and the personalities who've worked there makes for a lively slice of twentieth (and twenty-first) century cultural history. He is even better known as a baseball writer--he's in the Hall of Fame with Babe Ruth and Willie Mays!--and the baseball writing in the book is pure heaven for fans of the national pastime. Engaging, sharp, and wonderfully written, This Old Man is a pure pleasure to read"--… (more)

LibraryThing member TimBazzett
Roger Angell is like an 'institution' among writers and New Yorkers. Writers? That's easy, because he's been a fiction editor and contributor at The New Yorker for decades now. New Yorkers? Ah, that's mostly because of baseball, of course, and Angell's many columns, articles and books about
Show More
America's favorite pastime that have piled up over the past fifty years or so. And New Yorkers do love their baseball, dating back to the days of the Brooklyn Dodgers and the New York Giants - and New York-born Angell, at 95, certainly does date back that far, demonstrating in vivid terms his memories of Lefty Grove, Duke Snider, Joe DiMaggio, Mickey Mantle and others.

Me, I love Angell because of the books, the writers, all the literary connections he's made and maintained throughout the years. Giants like John Updike. "Colleagues for more than half a century," Angell collaborated with Updike - by phone, courier and email - in editing the scores of Updike short stories that graced the pages of their magazine over the years. An Updike enthusiast since college, I relished this description of the shy, gentle man -

"Now and then he would turn up at the office, startling me once again with his height and his tweeds, that major nose, and his bright eyes and up-bent smile; he spoke in a light half-whisper and, near the end of each visit, somehow withdrew a little, growing more private and less visible even before he turned away. The fadeaway, as I came to think of it ..."

And many farewell tributes to famous people, some he knew personally, others he did not, but admired from afar: Bob Feller, Duke Snider, Earl Weaver, Don Zimmer and other sports heroes; V.S. Pritchett, Harold Ross, Gardner Botsford, William Steig. There are even a few humorous haikus here, written at the suggestion of his current wife, Peggy, whose fifth graders were learning the haiku form.

There is not a bad piece in this whole book, when you come right down to it. Roger Angell writes in a way that makes you think, "Why I could have written that." That's how easy he makes it look, but he admits repeatedly that writing is hard. And he's right. If you make it look easy, that means you have worked and worked at it.

I have two favorite pieces here, and both of them are infused in equal parts with grief and humor, which is a pretty hard thing to pull off. But Angell does it, first in "Over the Wall," in which he writes about the death of Carol, his wife of forty-eight years and how he struggled to cope with it. And second, in the book's title piece, "This Old Man," all about the pains and problems of growing old, and remembering dear ones who are gone, but also about the occasional and unexpected joys that come along to surprise you.

I loved this book. And by the way, if you've not read Angell's memoir, LET ME FINISH, don't miss that one either. Roger Angell is an American treasure. My highest recommendation.

PEN/Diamonstein-Spielvogel Award for the Art of the Essay Longlist

On writing : a memoir of the craft by Stephen King
Avid reader : a life by Robert Gottlieb
Moneyball : the art of winning an unfair game by Michael Lewis
One man's meat by E. B. White
Essays of E.B. White by E. B. White
12 more
Writings from the New Yorker : 1927-1976 by E. B. White
Writing Down the Bones by Natalie Goldberg
Up in the old hotel and other stories by Joseph Mitchell
Wait till next year : a memoir by Doris Kearns Goodwin
Working : researching, interviewing, writing by Robert A. Caro
Bird by bird : some instructions on writing and life by Anne Lamott
Letters of E. B. White by E. B. White
Silk Parachute by John McPhee
The light of the world : a memoir by Elizabeth Alexander
The year of magical thinking by Joan Didion
The years with Ross by James Thurber
A room of one's own by Virginia Woolf
Fewer