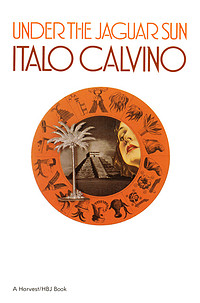 Under the jaguar sun

"The thought . . . called up the flavors of an elaborate and bold cuisine, bent on making the flavors' highest notes vibrate, juxtaposing them in modulations, in chords, and especially in dissonances that would assert themselves as an incomparable experience." -- From Under the Jaguar Sun   These intoxicating stories delve down to the core of our senses of taste, hearing, and smell. Amid the flavors of Mexico's fiery chiles and spices, a couple on holiday discovers dark truths about the maturing of desire in the title story, "Under the Jaguar Sun." In "A King Listens," a gripping portrait of a frenzied mind, the menacing echoes in a huge palace spur a tyrant's thoughts to the heights of paranoid intensity. "The Name, the Nose" drives to a startling conclusion as men across time and space pursue the women whose aromas have enchanted them. Mordant and deliciously offbeat, this trio of tales is a treat from a master of short fiction. "[Calvino is] a learned, daring, ingeniously gifted magus . . . Under the Jaguar Sun . . . fuses fable with neuron . . . The reader is likely to salivate." -- Cynthia Ozick, New York Times Book Review… (more)

LibraryThing member iayork
Posthumous -- and it shows: A collection of 3 short stories. Each deals with one of the senses and were going to be part of a projected suite with, presumably, some kind of framing device. Calvino was one of those happy people that can write works that stretch the intellect without altogether
Show More
sacrificing story, plot and characterisation. The middle tale ('A King Listens') is unsuccessful, ending up as nothing more than an experiment - who knows whether it would have improved had he time to revise it, it was the last thing he wrote before his death. But the opening and closing stories are much better, especially the latter ('The Name, The Nose'), although still not prime Calvino (try 'Adam One Afternoon', 'Invisible Cities' or 'If on a Winter's Night a Traveller' if you're new to the writer and want to know what his talents can *really* produce). 'Under the Jaguar Sun', the title story set in Mexico, deals with taste and develops the idea of human relationships as a form of canibalism in which we digest our partner to taste their thoughts, feelings, desires and wishes in order to make them part of ourselves. 'The Name, The Nose' takes three characters (a Proustian aesthete, a prehistoric apeman on the verge of walking upright and a drug-addled rock musician) that are all in love with an unknown woman identifiable only by her scent, eventually discovering that she has died since making love with them. Despite the differences in the characters, their tales are interlinked surpringly smoothly and satisfyingly. However, due to its posthumous nature, the book is very short, only 83 pages of big type, and so can only be recommended to Calvino fans.
Show Less
1 more
LibraryThing member BayardUS
In three stories dealing with the senses of taste, hearing, and smell, Calvino once again demonstrates his ability to use a seemingly simple jumping off point to explore more interesting topics, like the nature of relationships, the pointlessness of power, and the way desire connects to loss.

The
Show More
first story, the one that gives this collection its name, is the best of the three. Concerning itself with taste, Under the Jaguar Sun does a great job evoking the lush atmosphere of Oaxaca and the surrounding parts of Mexico, and more specifically the Mexican cuisine of the region. Although in the beginning it appears as though Calvino’s story about taste is going to be about the sensual nature of food (hardly a new interpretation of the topic), the tale takes a turn as it dances around the idea of cannibalism, and relationships as a form of emotional cannibalism. Flesh to the Aztecs was what raised the sun and fueled the universe, and in this story Calvino presents us with a tale of the flesh in more ways than one. Beyond the interesting take on the topic Under the Jaguar Sun also features a realistic depiction of a relationship and creates a sense of simmering tension that is masterfully done, making this story stand with the very best that Calvino has written.

The second story, A King Listens, has an interesting premise, but the execution prevented the story from striking me with real force. Here a king keeps himself on his throne perpetually, out of fear that leaving his throne for even a moment will provide all the opportunity a usurper would need to replace him with a convincing double. While on the throne the king can only keep in touch with the occurrences of the palace and in the city at large through his sense of hearing, though who knows if what he thinks he hears is truly what is occurring. Sound, when it reaches us through echoes or from a distance, can be warped and misleading. Intriguing, but Calvino wrote the story in such a way that the reader feels detached from the thoughts of the king and the events of the story as a whole. It also doesn’t help that the king has no characterization beyond his position and a generous dose of paranoia. The fact that this story was penned only a year before Calvino’s death raises the possibility that he was not done tinkering with it yet, but as it stands it is decidedly the weakest of the lot.

The final story is called The Name, the Nose and is actually a set of three intertwining tales following men dealing with women that they can only identify by their scent. Skipping between a nobleman, a caveman, and a rock band’s drum player, the story does a fine job at drawing parallels between the three stories and generally establishes smelling the scent of a woman as a primal, timeless experience. The story also establishes that, despite its primal nature, scents are things we imbue with meaning on our own through our life experiences, not pieces of objective information. Not quite as strong as Under the Jaguar Sun, but a solid story with impressive complexity given that it is less than twenty pages long.

The novel ends with a note from Calvino’s wife Esther, which states her belief that Calvino would not only have written stories dealing with the remaining senses of sight and touch, but would have created a frame narrative as well, perhaps to illustrate the world that exists outside of the physical senses. If he had pulled it off then this work would have stood with Invisible Cities and If on a Winter’s Night a Traveller as one of Calvino’s best. Instead we are left with a more modest work, but one where two of the three stories are quite good. I round that up to 4 stars on the strength of Under the Jaguar Sun, and recommend it to anyone looking for a shorter work by Calvino.