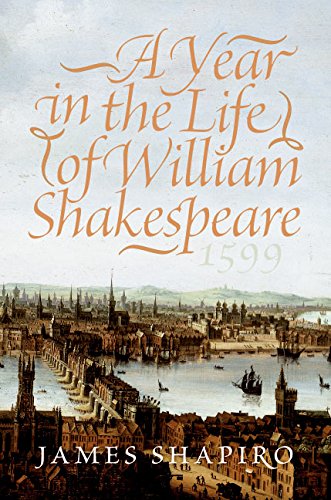 A Year in the Life of William Shakespeare: 1599

An intimate history of Shakespeare, following him through a single year--1599--that changed not only his fortunes but the course of literature. How was Shakespeare transformed from being a talented poet and playwright to become one of the greatest writers who ever lived? In this one exhilarating year we follow what he reads and writes, what he sees, and whom he works with as he invests in the new Globe Theatre and creates four of his most famous plays--Henry the Fifth, Julius Caesar, As You Like It, and, most remarkably, Hamlet. Shapiro illuminates both Shakespeare's staggering achievement and what Elizabethans experienced in the course of 1599: sending off an army to crush an Irish rebellion, weathering an Armada threat from Spain, gambling on the fledgling East India Company, and waiting to see who would succeed their aging and childless queen.--From publisher description.… (more)

LibraryThing member tortoise
I found this book both fascinating and infuriating.

On the one hand, it's well-written on a sentence level, contains a wealth of detail about the context Shakespeare was writing in, and does an excellent job of connecting that context to the texts.

On the other, it seemed sloppy to me in several ways. For one thing, it is far more willing to speculate on the interior life of historical figures than I'm comfortable with, and since its citation takes the form of a bibliographical essay rather than specific endnotes, it's not always possible to figure out where its speculations are coming from. For another, I noticed occasional bits of carelessness in its discussion of the Shakespearean text (which I'm more familiar with than its historical context -- part of the reason I was interested in reading the book in the first place). For example, when discussing the metaphorical use of the word "brother" in Henry V, it talks about how Henry refers to "his aristocratic kinsmen" Bedford and Gloucester as brothers, without making note of the fact that they are quite literally his brothers.

This was a very clear, understandable, narrative of a single year in Shakespeare's long career. The format works well. There are plenty of discussions of what is going on in England at this time, and how it directly affected Mr. Shakespeare's plays.

I ignored the entire last CD. It comprised excerpts from plays written in 1599. Strange. Wouldn't it had been better used for material that made it to the cutting floor?

But actually, this audio version was enough book for me.… (more)
LibraryThing member Cynfrank
This is the first time I used an audiobook for research. I was very sick and had a bad headache that prevented me from reading. So, I downloaded this book from Audible.com. Not only was I able to do reasearch in that state, but faster, I think. And I think I retained it. In fact there was a revelation in this book that I'm very thankful for. Of course, I'm not revealing what the revelation was.… (more)
LibraryThing member mahallett
i listened to this and the segments were about 12 minutes long. i stop listening about every 5 minutes. i have no pause and my machine starts at the beginning of each segment .
so this was a big problem and the book was hard to listen to and remember.
LibraryThing member eas
Excellently conceived. How events of 1599 impinged and reflected on one another - the year the Globe opened, a 'new beginning' for Shakespeare, the challenge of Ireland, etc, etc.

I say etc, etc because I only got half way through the book before myself giving up the challenge. A little too errudite after Anthony Holden's William Shakespeare and Terry Jones' Chaucer!

Must try again later.… (more)
LibraryThing member therebelprince
A beautiful read. In "1599", Shapiro tackles one year in the history of the citizens of London. It also happens to be the year William Shakespeare wrote "Henry V", "As You Like It", and "Julius Caesar", and began work on "Hamlet".

Despite the book's title, "1599" spreads its time equally between Elizabeth and her citizens, and the Bard himself. As Shapiro openly states, we know so little about what exactly led Shakespeare to write his plays, and about specific events in his life, that anything is by necessity conjecture - but he'd still rather stick to what is probable, not just possible. As such, he covers the complex political and social landscape brought about by Elizabeth and Essex, the Irish and the Spaniards, the changes in theatregoers and theatre laws, and other concerns that hit London and Stratford. He posits areas and concerns that may have affected Shakespeare as he wrote four such monumental works, while also seeking to explain the mindset of an Elizabethan during this shifting era.

What Shapiro has written is a book that first of all, educates about the living, breathing public mass of Londoners (people who, after all, were far more complex than any film stereotype); second, negates many of the needless conjectures determined to give every event in Shakespeare's plays some needlessly grandiose or tragic origin (all of which seek to undermine the fact that he was writing for a specific theatre and crowd, and working as a creative, not just working through some Freudian issues); and third, most importantly, sees Shakespeare as a human. We can never know what it was like to be such a genius during an era when history, linguistics, and politics rose up like never before. But we can ask questions about Shakespeare's personal stake in the theatre, about his reactions to other literary and political movements, about his reasons for taking age-old stories, myths, and plays, and reworking them into feats of ever-growing depth. A very enjoyable read, although I couldn't help wishing Shapiro could write a volume for every year of Shakespeare's professional life.… (more)
LibraryThing member k6gst
Quite good.
LibraryThing member FredLHolmes
If you're a Shakespeare fan I would HIGHLY recommend this book. It is an entertaining and extremely informative book about a year in the life of the finest writer in the English language. The year Mr. Shapiro analyzes is 1599 in which Shakespeare wrote four plays, including HAMLET. It was a volatile year in England with rebellions and political intrigue going on, and Shakespeare drew on all of that to write his plays. Mr. Shapiro does a wonderful job of showing the linkage between what was happening around Shakespeare and the stories and characters that ended up in his plays. The amount of detail is excellent, and Mr. Shapiro has a knack for making you feel like you're living through those events yourself. This is an especially good read for aspiring writers, as it dispels the myth that writing came easy to Shakespeare, and shows how much WORK went into plays.

I've read several books on the Bard, but this is my favorite so far, and I would highly recommend you read it.… (more)
LibraryThing member AlisonLea
Highly recommended--sheds new light on the year 1599 and the consequences of social history, especially politics, in Shakespeare's works. Helpful in the classroom as well.
Fewer