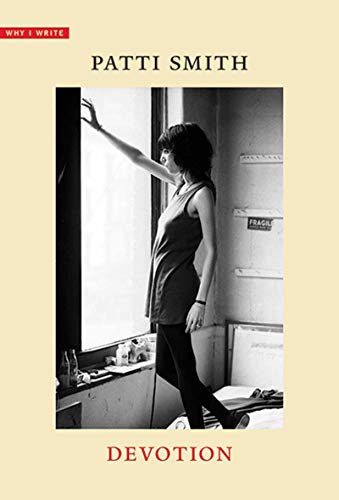 Devotion (Why I Write)

"In lyric essays, a story, poems, and photographs, Smith illuminates the whirl of chance and choice that stokes a writer's imagination, recounting her fascination on the eve of a trip to Paris with Simone Weil and an evocative, accidentally discovered film about Stalin's mass deportation of Estonians. In France, a gravestone, a televised figure-skating competition, a meal, and a garden all converge in what becomes Devotion, [a] ... fairy tale about a young, displaced Estonian skater and a solitary dealer in rare objects and arms. This ... fable about creativity and obsession, possession and freedom is followed by a meditation on how a work of art is, for other artists, a call to action"--Booklist, 08/01/2017.

LibraryThing member Eyejaybee
Reading this book was a strange experience for me.

Patti Smith is an iconic figure for my generation – punk, poet, priestess, hierophant – and her early albums (particularly Horses) rank among the all-time greats. Her performances ripple with a unique blend of eloquence and barely-suppressed rage, and her long and successful career has been founded on her talents as a wordsmith.

This short book seems a million miles away from Patti Smith’s recording career. It comes in three sections, the first of which recounts a trip she made to Paris to promote her latest book. She had first visited the city in the late 1960s, with her sister, and she takes the opportunity to revisit some old haunts, while immersing herself in a biography of Simone Weil, one of her heroes. She then decamps to England, to visit Weil’s grave in Ashfield, Kent. On the face of it, a very simple story, and it only extends to twenty or so small pages, but Smith writes it so beautifully, and conjures such enthusiasm about Weil’s life and work that the reader is completely transported.

The second section is more problematic. At the simplest level, it is a short story about a girl with a troubled personal history who loves skating. There are some marvellous moments, and breath-taking images, but the story itself in simply too implausible to work. An intriguing exercise in style over substance, but one that just didn’t quite work for me.

For the third section, however, Smith comes roaring back with a brief essay about why she writes. Incisive and insightful, she concludes with a killer final line. Bizarrely, the weakest part of the book were the poems that she inserts between the different sections that I found quite excruciating.… (more)
2 more
LibraryThing member Michael.Rimmer
Smith's opening essay gives a snapshot of her life leading up to the composition of the title story. I found the essay fascinating; beautifully written and transporting. She allowed me to feel like I was her journey's companion, sharing her coffee, experiencing the sights, sounds and feel of the places through which she was travelling (even when she was staying somewhere, absorbing its atmosphere, it felt like Patti was looking to the next place, and these memories and sensations were to take home with her).

The story that emerged from her travels I found less engaging. Not without interest, at times variously moving, shocking, confusing and frustrating. I feel a degree of sadness and pity towards her main character, Eugenia, but I'm not sure if that is Smith's intention - I'm sure Eugenia would want neither emotion from me. I didn't quite connect with Eugenia, though, which makes her motivations obscure for me. This, I think, because .

The end of the short story is beautifully written in a clear prose that projected itself onto the screen of my imagination like a film. I have a sharply defined picture of Eugenia on the ice as she whirls and pirouettes. That the conclusion of Eugenia's story is strongly hinted but, again, not stated, is fitting and this final scene lifted the work up a level for me.

The final essay continues the journey Smith stated in the opening chapter, but she is grounded here, washed up on the shores of Albert Camus' house. It's a nice "thank you" letter to his daughter for letting Smith stay with her and examine some of her literary hero's manuscripts, but I'm not sure I need to read it. (There's more to it than that, to be fair, but this is the impression with which I was left.)

I love Patti Smith's music so much that I really want to give this book five stars, but I feel myself hesitating at giving it four. I therefore, feeling traitorous, reluctently rate it at three stars.… (more)
LibraryThing member ThomasPluck
a wonderful read, a story within an essay about writing and a visit to France that ends at the house of Albert Camus.
Fewer

M train by Patti Smith
Just Kids by Patti Smith
Who's writing this? : notations on the authorial I, with self portraits by Daniel Halpern
Conversations with American Writers by Charles Ruas
The Writer's Notebook II: Craft Essays from Tin House by Francine Prose
4 more
Shakespeare and Company, Paris: A History of the Rag & Bone Shop of the Heart by Krista Halverson
The one inside by Sam Shepard
To show and to tell : the craft of literary nonfiction by Phillip Lopate
The nickel boys : a novel by Colson Whitehead
Fewer