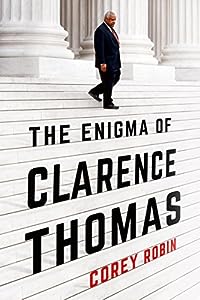 The enigma of Clarence Thomas

A groundbreaking revisionist take on Clarence Thomas, the Supreme Court justice everyone knows about but no one knows Most people can tell you two things about Clarence Thomas: Anita Hill accused him of sexual harassment, and he almost never speaks from the bench. Here are some things they don't know: Thomas is a black nationalist. In college he memorized the speeches of Malcolm X. He believes white people are incurably racist. In the first examination of its kind, Corey Robin - one of the foremost analysts of the right - delves deeply into both Thomas's biography and his jurisprudence, masterfully reading his Supreme Court opinions against the backdrop of his autobiographical and political writings and speeches. The hidden source of Thomas's conservative views, Robin shows, is a profound skepticism that racism can be overcome. Thomas is convinced that any government action on behalf of African-Americans will be tainted by racism; the most African-Americans can hope for is that white people will get out of their way. There's a reason, Robin concludes, why liberals often complain that Thomas doesn't speak but seldom pay attention when he does. Were they to listen, they'd hear a racial pessimism that often sounds similar to their own. Cutting across the ideological spectrum, this unacknowledged consensus about the impossibility of progress is key to understanding today's political stalemate.… (more)

LibraryThing member Tytania
A well-researched and thickly detailed yet not overly long book; the whole thesis is perfectly laid out in the introduction, while the rest is just supporting evidence. What do you know about Clarence Thomas? I was with most Americans: the only things they "know about him are that he once was accused of sexual harassment and that he almost never speaks from the bench." And that he's a black guy that always voted with the late Scalia. Hence the enigma of the title.

Corey Robin's well-supported thesis is that Thomas is not a conservative who happens to be black. His conservatism is on the contrary rooted in black radicalism. Thomas grew up in the Black Power movement and read and listened to the speeches of Malcolm X repeatedly throughout his life. His vision is one of black separatism based on the traditional patriarchal values he grew up with, raised by an autocratic grandfather. His grandfather, a self-made black businessman, is also the basis for his vision of a black separatist capitalism and feeds into his jurisprudence on cases of economics, the free market, and decisions like Citizens United, which deemed corporate entities entitled to free speech rights.

It's a thing to wrap your head around: Thomas is so radical he's conservative. And yet it's all out there in plain sight in his writings and his decisions on the Court. The book lays it out in detail. Yet somehow we don't know this - I didn't. We don't see it. We see a black conservative and just kind of think, "Well, these things happen." Robin's book begins with a quote from Ralph Ellison's INVISIBLE MAN: "I am invisible, understand, simply because people refuse to see me... When they approach me they see only my surroundings, themselves, or figments of their imagination - indeed, everything & anything except me." Reading this book is exactly an eye-opening exercise.… (more)

Supreme discomfort : the divided soul of Clarence Thomas by Kevin Merida
Before the Storm: Barry Goldwater and the Unmaking of the American Consensus by Rick Perlstein