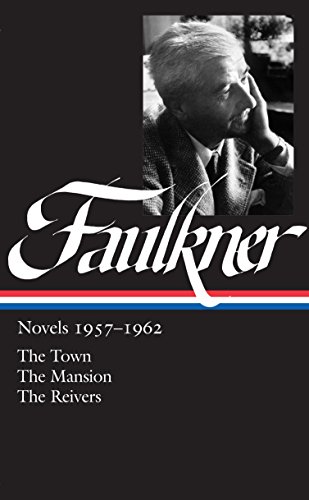 "William Faulkner's fictional chronicle of Yoknapatawpha County culminates in his three last novels, rich with the accumulated history and lore of the microcosmic domain where he set most of his novels and stories. Faulkner wanted to use the time remaining to him to achieve a summing-up of his fictional world." "The Town (1957) is the second novel in the Snopes trilogy that began with The Hamlet. Here the rise of the rapacious Flem Snopes and his extravagantly extended family, as they connive their way into power in the county seat of Jefferson is filtered through three separate narrative voices. Faulkner was particularly proud of the two women characters - the doomed Eula and her daughter Linda - who stand at the novel's center." "Flem's relentless drive toward wealth and control plays itself out in The Mansion (1959), in which a wronged relative, the downtrodden sharecropper Mink Snopes, succeeds in avenging himself and bringing down the corrupt Snopes dynasty." "His last novel, The Reivers: A Reminiscence (1962), is distinctly mellower and more elegiac than his earlier work. A picaresque adventure set early in the twentieth century and involving a Memphis brothel, a racehorse, and a stolen automobile, it evokes the world of childhood with a final burst of comic energy."--BOOK JACKET.… (more)

LibraryThing member plb1934
"The Reivers is a nostalgic look at the early days of Jefferson (the key town in Faulkner's invented Yoknapatawpha County) told mostly through the eyes of a young boy. The story is linear and easy to follow, and the humor is some of Faulkner's funniest and most heart-warming." I FOUND THIS BOOK VERY DIFFICULT TO READ -PLB