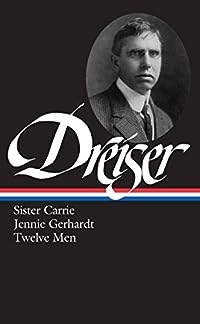 Theodore Dreiser was arguably the most important figure in the development of fiction in the twentieth century. In this Library of America volume are presented the first two novels and a little-known collection of biographical sketches by the man about whom H. L. Mencken said, "American writing, before and after his time, differed almost as much as biology before and after Darwin." Dreiser grew up poor in a series of small Indiana towns, in a large German Catholic family dominated by his father's religious fervor. At seventeen he moved to Chicago and eventually became a newspaper reporter there and in St. Louis, Pittsburgh, and New York. Reaction to his first book, Sister Carrie (1900), was not encouraging, and after suffering a nervous breakdown, he went on to a successful career editing magazines. In 1910 he resumed writing, and over the next fifteen years published fourteen volumes of fiction, drama, travel, autobiography, and essays. "Dreiser's first great novel, Sister Carrie . . . came to housebound and airless America like a great free Western wind, and to our stuffy domesticity gave us the first fresh air since Mark Twain and Whitman," Sinclair Lewis declared in his Nobel Prize acceptance speech in 1930. Carrie Meeber, an eighteen-year-old small-town girl drawn to bustling Chicago, becomes the passionless mistress of a good-humored traveling salesman and then of an infatuated saloon manager who leaves his family and elopes with her to New York. Dreiser's brilliant, panoramic rendering of the two cities' fashionable theaters and restaurants, luxurious hotels and houses of commerce, alongside their unemployment, labor violence, homelessness, degradation, and despair makes this the first urban novel on a grand scale. In a 1911 review, H. L. Mencken wrote, "Jennie Gerhardt is the best American novel I have ever read, with the lonesome but Himalayan exception of Huckleberry Finn." Beautiful, vital, generous, but morally naïve and unconscious of social conventions, Jennie is a working-class woman who emerges superior to the succession of men who exploit her. There are no villains in this novel; in Dreiser's view, everyone is victimized by the desires that the world excites but can never satisfy. Dreiser's embracing compassion is felt in Twelve Men (1919), a collection of portraits of men he knew and admired. They range from "My Brother Paul" (Paul Dresser, vaudeville musical comedian and composer of "On the Banks of the Wabash" and "My Gal Sal") to "Culhane, the Solid Man," a sanatorium owner and former wrestler. Without sentiment but with honest emotion and respect for the bleak and unvarnished truth, Dreiser recalls these anomalous individuals and the twists of fate that shaped their lives. LIBRARY OF AMERICA is an independent nonprofit cultural organization founded in 1979 to preserve our nation's literary heritage by publishing, and keeping permanently in print, America's best and most significant writing. The Library of America series includes more than 300 volumes to date, authoritative editions that average 1,000 pages in length, feature cloth covers, sewn bindings, and ribbon markers, and are printed on premium acid-free paper that will last for centuries.… (more)

LibraryThing member jwhenderson
This was my introduction to the world of Theodore Dreiser more than forty years ago when I was devouring American literature in high school. His journalistic prose style, while sometimes prolix, was just right for me and I read his novels about Frank Cowperwood and the massive An American Tragedy. But before Clyde Griffiths' downfall there was the story of Sister Carrie, published on November 8, 1900 to a prolonged uproar, that riveted me as she succumbed to the advances of vastly more experienced men. A Pamela some 150 years on, Carrie also confronts temptation, making the leap from her small town to Chicago and, feeling that she had few options, into the calculating arms of the travelling salesman, Drouet. After overcoming her doubts about sharing the salesman’s apartment, she stands before the window looking into her "never wholly convincing” conscience:
"It was only an average little conscience, a thing which represented the world, her past environment, habit, convention, in a confused way. With it, the voice of the people was only the voice of God.
“Oh, thou failure!” said the voice.
“Why?” she questioned.
“Look at those about,” came the whispered answer. “Look at those who are good. How would they scorn to do what you have done. Look at the good girls; how will they draw away from such as you when they know you have been weak. You had not tried before you failed.”
Carrie moves up the social ladder to the wealthy George Hurstwood. Fleeing an unhappy marriage he takes her to New York City. There things take a turn, for while the book is of course about Carrie herself as the story goes on, it becomes more of Hurstwood’s tale. Yes, Carrie is still the force driving it, but we are given two separate lives—as Carrie manages to thrive, Hurstwood becomes homeless, helpless. The handling of these characters and their tragic lives makes this a great book by one of America's best writers.… (more)