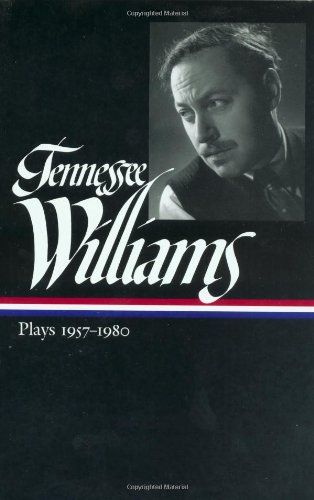 New York : Library of America : Distributed to the trade in the U.S. by Penguin Putnam, c2000.

Exploring human passion with daring and unflinching honesty, Tennessee Williams forged a poetic theater of raw psychological insight that fused realism and expressionism. Now, in an authoritative two-volume edition, The Library of America collects the plays that reveal a prophetic figure in American life and letters—a writer of generous sympathies and uncompromising frankness who reached wide audiences with plays that revolutionized the themes and styles of the modern theater. This second volume traces Williams's career as it evolved in his adventurous and sometimes shocking later works, including Orpheus Descending, Suddenly Last Summer, and Sweet Bird of Youth, plays that stirred controversy when first produced because of their concern with acts of horrific violence; the satiric marital comedy Period of Adjustment; The Night of the Iguana, a moving drama set in Mexico that contains some of Williams's most lyric writing, and The Eccentricities of a Nightingale, a re-imagining of the earlier Summer and Smoke. The Milk Train Doesn't Stop Here Anymore, with its use of Kabuki-like stylization, began a more experimental phase of Williams's writing, represented here by Kingdom of Earth (also known as The Seven Descents of Myrtle), The Mutilated, Small Craft Warnings, and Out Cry. In late plays such as A Lovely Sunday for Creve Coeur and the autobiographical Vieux Carr#65533;, Williams returned to many of his earlier themes and settings. This edition includes a newly researched chronology of Tennessee Williams's life, explanatory notes (including cast lists of many of the original productions), and an essay on the texts.… (more)

LibraryThing member CurrerBell
While I've 4****-rated the first Library of America volume of Tennessee Williams, I just can't rate this second volume better than 3***. It's just too incomplete to be of serious academic use (and also, please note that Williams produced other plays subsequent to 1980), whether because of space limitations or because of difficulty in obtaining rights to some of the omitted work.

This volume does, though, give a good sampling of and is probably the most complete single-volume anthology available of Williams's later plays, complete for full-length plays through 1968's The Seven Descents of Myrtle (though even here omitting most of the period's one-act plays). After 1968, the inclusiveness become much spottier, concluding with 1979's quite underrated A Lovely Sunday for Creve Coeur.

A good collection, but seriously lacking in completeness.… (more)