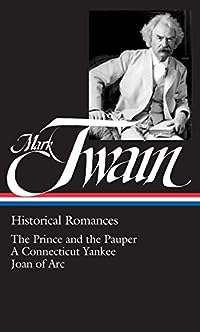 The prince and the pauper: When young Edward VI of England and Tom Canty, a poor boy who looks just like him, exchange places, each learns a valuable lesson about the other's very different station in life in sixteenth-century England. A Connecticut Yankee in King Arthur's court: A blow to the head transports a Yankee to 528 A.D. where he proceeds to modernize King Arthur's kingdom by organizing a school system, constructing telephone lines, and inventing the printing press. Personal recollections of Joan of Arc: Twain's most ambitious work is a fictional translation of Sieur Louis de Conte's memoirs, the one person who was with Joan during the three important stages of her life: as a visionary village peasant, as a military genius and as the defendant at her trial.… (more)

LibraryThing member auntieknickers
I've only read The Prince and the Pauper and A Connecticut Yankee... and it was a long time ago, but I recall enjoying them very much although they are not up to the standard of Huckleberry Finn.