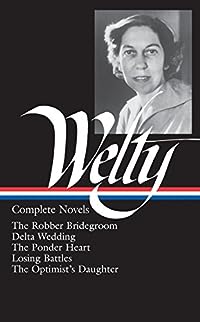 New York : Library of America : Distributed to the trade in the USA by Penguin Putnam, c1998.

In a career spanning five decades, Eudora Welty has chronicled her own Mississippi with a depth and intensity matched only by William Faulkner. One of the most influential writers of the century, her novels and stories blend the storytelling tradition of the South with a modernist sensibility attuned to the mysteries and ambiguities of experience. Welty explores the complex abundance of southern, and particularly southern women's, lives with an artistry that Salman Rushdie has called "impossible to overpraise." Complete Novels gathers all of Welty's longer fiction in one volume for the first time. In The Robber Bridegroom (1942), based on a Grimm fairy tale, legendary figures from Mississippi's past, such as the keel-boat captain Mike Fink and the savage outlaws the Harp Brothers, mingle with Welty's own imaginings in a free-ranging and boisterous fantasy set along the Natchez Trace. The richly textured Delta Wedding (1946), set against a backdrop of rural Mississippi in the 1920s, vividly portrays the intricacies of family relationships in its account of the sprawling Fairchild clan. Edna Earle Ponder's unrestrained and delightfully absurd monologue, superb in its capturing of the rhythms of country speech, shows Welty's humor at its idiomatic best in The Ponder Heart (1954), a flight of invention culminating in a murder trial that becomes an occasion for exuberant comedy. The monumental Losing Battles (1970), composed over fifteen years, brings Welty's imaginative gifts to the largest canvas of her career, rendering a Depression-era family reunion with mythic scope and ebullient comic vigor. The volume concludes with The Optimist's Daughter (1972), a taut and moving story of a woman rediscovering the world of her childhood as she comes to terms with her father's death. Often considered her masterpiece, it won the Pulitzer Prize for Literature in 1972.… (more)

In the middle of cotton picking time, 17 year old Dabney Fairchild has announced that she will marry her family's overseer, Troy Flavin, a man decidedly not from the Delta, and at this moment exactly twice Dabney's age. ("...but that was just a funny accident, thirty-four being twice seventeen, it wouldn't be so later on. When she was as much as twenty-five, he wouldn't be fifty!") We learn of the upcoming wedding first from Dabney's 9-year-old cousin, Laura McRaven, who is traveling from Jackson alone on the train to attend. At first we see everything through Laura's eyes, colored slightly by her memory of being among the Fairchilds before, and by the fact that her mother has recently died. There is a large family (8 children, multiple aunts and uncles, and the black servants) spread over a sprawling plantation, the neighboring town, and some as far away as Memphis, all converging on short notice to see Dabney married. Despite the fact that "everyone" said the Fairchilds would die if there were to be a match between Dabney and Troy when they began keeping company, only her father seems to have raised any real protest, and even he ultimately relents to give her "any kind of wedding" she wanted.
This is the 1920's, and while the plantation is almost self-contained, and somewhat outside of time, still hints of the world beyond its fields and cotton houses creep in. Dabney's older sister, Shelley, longs to get her hands on a copy of The Beautiful and Damned, which is going around the Delta, and she is packing for a trip to Europe with her Aunt Tempe. Flowers, dresses, cake and shepherdesses' crooks for the wedding come in from Memphis and are viewed with awe and some skepticism. A cousin, also from Memphis, brings chicken pox with her, and must be quarantined.
The novel is short on plot, long on place and character, brimming with subtext. There are flighty maiden aunts, scatty and somewhat scary old black retainers, drunken uncles, dissatisfied wives, precocious children who pop in and out with observations and pronouncements that often seem out of place. The action sometimes has the feel of a stage play, and in fact treating it that way was helpful to me at times when I couldn't seem to "engage" with what was going on. I just tried to watch it as carefully as possible until the scene changed. There are levels and levels of meaning in the commonplace goings-on, and trying to read this book casually or superficially is likely to leave the reader unimpressed. There just isn't enough pure story to carry you on, unless you plunge into the depths and realize how much exploration of relationships and themes is happening below the surface. Men/women, blacks/whites, youth/age, love and disillusionment, class differences, motherhood, moral ambiguities...so much is going on. Just as one example, the whole subject of pregnancy and childbirth permeates scene after scene. Dabney's mother is pregnant (for the tenth time). Pinchy, one of the servants, is clearly near to giving birth, quite possibly to Troy's child. A cousin couldn't come to the wedding, because she has just recently had a baby. There is even a suggestion that Dabney may be pregnant. (One scene in particular put that idea in my head, and after all, why else would she be getting married in such a hurry at such an inopportune time?)
I'm not much of a close reader, but this novel is beautifully composed in a way that made that process rewarding. And naturally, once will not be enough for me. I think I've only begun to "know" this book.