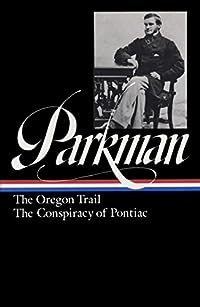 Francis Parkman : The Oregon Trail / The Conspiracy of Pontiac (The Library of America)

"From boyhood," wrote Francis Parkman, "I had a taste for the woods and the Indians." This Library of America volume, containing The Oregon Trail and The Conspiracy of Pontiac, brilliantly demonstrates this lifelong fascination. His first book, The Oregon Trail, is a vivid account of his frontier adventures and his encounters with Plains Indians in their final era of nomadic life. The Conspiracy of Pontiac and the Indian War after the Conquest of Canada, Parkman's first historical work, portrays the fierce conflict that erupted along the Great Lakes in the aftermath of the Seven Years' War and chronicles the defeats in which the eastern Native American tribes "received their final doom." The Oregon Trail (1849) opens on a Missouri River steamboat crowded with traders, gamblers, speculators, Oregon emigrants, "mountain men," and Kansas Indians. In his search for Natives untouched by white culture, Parkman meets the Whirlwind, a Sioux chieftain, and follows him through the Black Hills. His descriptions of natives' buffalo hunts, feasts and games, feuds, and gift-giving derive their intensity from his awareness that he was recording a vanishing way of life. Praised by Herman Melville for its "true wild-game flavor," The Oregon Trail is a classic tale of adventure that celebrates the rich variety of life Parkman found on the frontier and the immensity and grandeur of America's western landscapes. In The Conspiracy of Pontiac (1851), Parkman chronicles the consequences of the French defeat in Canada for the eastern Native American tribes. At the head of the Native American resistance to the Anglo-American advance in the 1760s was the daring Ottawa leader Pontiac, whose attacks on the frontier forts and settlements put in doubt the continuation of western expansion. A powerful narrative of battles and skirmishes, treaties and betrayals, written with eloquence and fervor and filled with episodes of heroism and endurance, The Conspiracy of Pontiac captures the spirit of a tragic and tumultuous age. LIBRARY OF AMERICA is an independent nonprofit cultural organization founded in 1979 to preserve our nation's literary heritage by publishing, and keeping permanently in print, America's best and most significant writing. The Library of America series includes more than 300 volumes to date, authoritative editions that average 1,000 pages in length, feature cloth covers, sewn bindings, and ribbon markers, and are printed on premium acid-free paper that will last for centuries.… (more)

LibraryThing member kcshankd
The OT: Parkman is an excellent guide and observer, reporting on the big wild at the beginning of the end.

Conspiracy: Compares poorly to the former. It seems when writing 'history', Parkman was at pains to be more formal, but this only makes the result more stilted.

I'm still trying to determine the best way to review these LOA compilations, but for now three stars overall.
Show Less
2 more
LibraryThing member amerynth
Of the two books, I liked Parkman's "The Oregon Trail" best His vivid descriptions and great detail are most interesting here, as he describes the people -- from traders to homesteaders to Native Americans he met while traveling the American West in the 1840's. The book is full of adventure,
Show More
buffalo hunting and narrow escapes from hostile tribes.

"The Conspiracy of Pontiac" tells the final chapter of the French and Indian War. It focuses on the 1760's, as the Great Lake tribes, who favored the French traders, attempt to toss England out by orchestrating a raid on a number of forts and homesteads. This is a period of American (and Canadian) history, I knew little about and found it interesting. However, Parkman's attention to detail made this book bog down a bit -- it was a little bit harder to read.
Show Less
LibraryThing member JVioland
Great history. Parkman journeys to Oregon...he doesn't even get half-way! A faulty title but incredible scenery and personal accounts like hunting bison only for the tongue! The waste of nature that prevails among Parkman's generation can be understood by the abundance of everything. If only they
Show More
knew the legacy they would leave later generations. I finished this in 2008.
The Conspiracy of Pontiac is pure objective history taken from incredible research including the British military records, French records, correspondence, etc. How different a true historian is when compared to today's claim of scholarship by reading peer-review articles. We certainly need to reevaluate current historical scholarship.
Show Less
Fewer