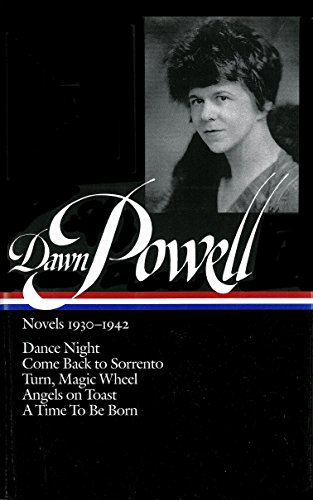 Dawn Powell--a vital part of literary Greenwich Village from the 1920s through the 1960s--was the tirelessly observant chronicler of two very different worlds: the small-town Ohio where she grew up and the sophisticated Manhattan to which she gravitated. If her Ohio novels are more melancholy and compassionate, her Manhattan novels, exuberant and incisive, sparkle with a cast of writers, show people, businessmen, and hustling hangers-on. All show rich characterization and a flair for the gist of complex social situations. A playful satirist, an unsentimental observer of failed hopes and misguided longings, Dawn Powell is a literary rediscovery of rare importance. In this, one of two volumes collecting nine novels, The Library of America presents the best of Powell's fiction. Dance Night (1930), Powell's own favorite among her works, is a surprisingly frank treatment of obsessive longing set in an Ohio factory town during the 1920s. Come Back to Sorrento (1932; originally published as The Tenth Moon), a compelling study of frustrated aspirations, tells the story of a woman whose friendship with a music teacher awakens her sense of her life's wasted potential. With Turn, Magic, Wheel (1936), a whirlwind tour of Manhattan's literary world, Powell reinvented herself as a satirical writer. Her treatment of the "city of perpetual distraction" captures the allure of Manhattan with a lightness and wit to be found in all her New York novels. Angels on Toast (1940), whose farcical pace recalls screwball comedy, is a shrewd portrait of the adulterous misadventures of two salesmen. In A Time To Be Born (1942), set during the months before America's entry into World War II, Powell portrays the monstrously egotistical Amanda Keeler Evans--one of her most wickedly barbed creations. LIBRARY OF AMERICA is an independent nonprofit cultural organization founded in 1979 to preserve our nation's literary heritage by publishing, and keeping permanently in print, America's best and most significant writing. The Library of America series includes more than 300 volumes to date, authoritative editions that average 1,000 pages in length, feature cloth covers, sewn bindings, and ribbon markers, and are printed on premium acid-free paper that will last for centuries.… (more)

LibraryThing member Cheryl_in_CC_NV
I don't remember this very well, but I'm pretty sure I read all the stories (novellas?) in this volume. I do feel confident in encouraging you to read it if you're interested.