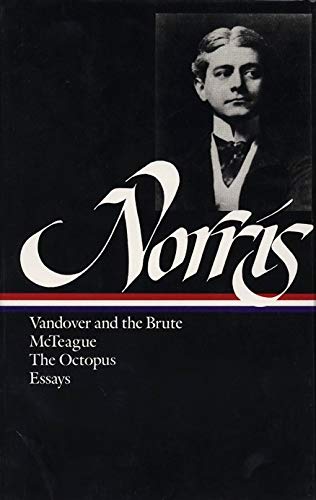 This Library of America volume presents three novels and the collected essays of the most promising of the American naturalist writers. Inspired by the "new novel" developed by Zola and Flaubert, Frank Norris adapted its methods to American settings, adding his own taste for exciting action and a fascination with the emergent sciences of economics and psychology. Vandover and the Brute (1914) was published posthumously but written in 1895 during Norris's year at Harvard. Drunkenness, sensuality, gambling, and debauchery reduce young Vandover, once a fashionable playboy and aspiring artist, to virtual bestiality. His dissipation is described with shocking realism, as Norris paints each level of San Francisco society he encounters in his descent. The novel McTeague (1899) represented a radical departure for American fiction of its era in its frank treatment of sex, domestic violence, and obsession. McTeague is a huge, simple dentist who dreams of having a giant tooth to hang outside his office and who carries his pet canary wherever he goes; Trina is his gentle, diminutive wife, who wins a lottery and compulsively hoards her money. They live on Polk Street in San Francisco, where the new middle class struggles with its pathological underside. Erich von Stroheim based his classic film Greed (1924) on this immensely powerful and grimly realistic novel. The Octopus (1901), the first work in Norris's unfinished trilogy "The Epic of the Wheat," is a novel about the ranchers and wheat producers of California. Pitted against the railroad monopoly and political machine, the members of the ranching community are forced to take up arms against the state. Inspired by the Mussel Slough Massacre of 1880, it depicts a band of strong ruthless Westerners who are crushed by inexorable forces of nature and capital they had sought to control. The twenty-two essays in this volume include book reviews, articles, literary columns, and parodies of popular authors in the hilarious "Perverted Tales."  LIBRARY OF AMERICA is an independent nonprofit cultural organization founded in 1979 to preserve our nation's literary heritage by publishing, and keeping permanently in print, America's best and most significant writing. The Library of America series includes more than 300 volumes to date, authoritative editions that average 1,000 pages in length, feature cloth covers, sewn bindings, and ribbon markers, and are printed on premium acid-free paper that will last for centuries.… (more)

LibraryThing member jwhenderson
The Octopus: While more than a great read, I cannot pretend to agree with the dire determinism of the author, Frank Norris. This novel of California wheat farmers versus the Railroad (the 'Octopus' of the title) is in the naturalistic tradition of Zola. In fact I was reminded of my reading of Germinal at times while rereading this classic, yet flawed, novel. Norris tends toward hyperbole at times and the prose can be somewhat melodramatic, yet it is a lucidly written novel with fascinating characters. The poet, Presley, is one character who particularly fascinated me. Presumably a stand-in for Norris himself, Presley is able to comment on the action and almost persuade the people to rise up against the Railroad; however, he is ultimately unsuccessful in changing their fate determined by Nature. Norris planned a trilogy based on his story of 'Wheat' but only finished one more volume, The Pit, before his untimely death… (more)
1 more
LibraryThing member JVioland
Contains one of my favorite books: The Octopus. Norris has become one of my favorite authors. His clear realism makes it easy to lose yourself in his wonderful writing. A truly gifted writer cut short. If he had lived he may have become one of the greatest American writers. What a pity.
Fewer