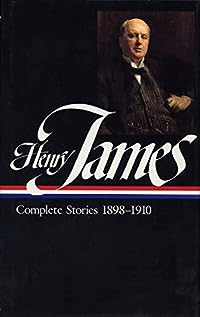 "We work in the dark--we do what we can--we give what we have. The rest is the madness of art." These words, spoken by a dying novelist in "The Middle Years," sum up Henry James's credo as a writer. In more than one hundred stories, ranging from brief anecdotes to richly developed novellas, James displayed the unwavering intensity of his aesthetic vision--and he did so with an astonishing variety of invention. The Library of America makes this body of writing available in its entirety in a new, authoritative edition of James's world-famous stories, complete in five volumes. The thirty-one stories presented here are the culmination of James's glorious final period. Among them are the extraordinary fantasies "The Great Good Place" and "The Jolly Corner," in which supernatural motifs are used hauntingly to express undercurrents of yearning and dislocation; "Julia Bride," a character portrait akin to "Daisy Miller," in which a young American woman experiences the social pleasures and vicissitudes of the marriage market; "Crapy Cornelia," a story whose sense of the compelling power of nostalgic memory owes much to James's 1904 return visit to New York City; "The Birthplace," a comic tale about the commercialization of genius that has lost none of its satiric ed≥ "The Tree of Knowledge," a sly dissection of the family life of a pampered sculpt∨ "The Beast in the Jungle," one of James's masterpieces, the harrowing account of a man's confrontation with his own lost opportunities that has been seen as foreshadowing many of the dominant themes of twentieth-century literature; and "A Round of Visits," James's last story, about the need to confide and the limits of sympathy. LIBRARY OF AMERICA is an independent nonprofit cultural organization founded in 1979 to preserve our nation's literary heritage by publishing, and keeping permanently in print, America's best and most significant writing. The Library of America series includes more than 300 volumes to date, authoritative editions that average 1,000 pages in length, feature cloth covers, sewn bindings, and ribbon markers, and are printed on premium acid-free paper that will last for centuries.… (more)