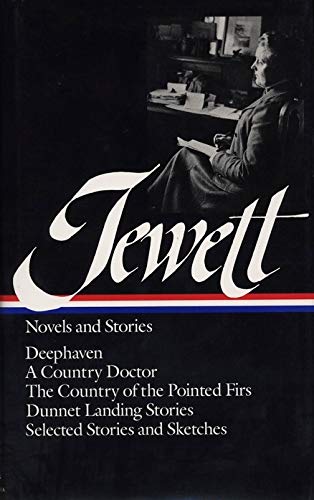 In her nuanced and sharply etched novels and short stories, Sarah Orne Jewett captured the innerlife and hidden emotional drama of outwardly quiet New England coastal towns. Set against the background of long Maine winters, hardscrabble farms, and the sea, her stories of independent, capable women struggling to find fulfillment in their lives and work have a surprisingly modern resonance. Here is the first collection to include all her best fiction, and it reveals the full stature of the writer Willa Cather ranked with Mark Twain, and Nathaniel Hawthorne. Jewett struck her characteristic note in her first collection, Deephaven (1877), stories whose exploration of Maine life moved and delighted readers when they were first published in the Atlantic Monthly, and opened a new vein of regional fiction in American literature. Of the distinctly local quality of her writings Willa Cather later said: "The language her people speak to each other is a native tongue. No writer can invent it. It is made in the hard school of experience, in communities where language has been undisturbed long enough to take on color and character from the nature and experiences of the people." The novel A Country Doctor (1884), inspired by both her own life and that of her doctor father, is often read as a veiled autobiography. Her focus here is on a woman who must choose between marriage and her commitment to a medical career, a decision she defends passionately against the narrowness of those around her: "God would not give us the same talents if what were right for men were wrong for women." Jewett's masterpiece, The Country of the Pointed Firs (1896), brings to imaginative life the faded trading port of Dunnet Landing, Maine, re-creating in spare, impressionistic prose the rhythms and textures of a communal society of poor fishermen and farmers, with its traditional country rituals and its stoically endured tragedies. In these linked stories we meet some of Jewett's most unforgettable characters - a woman who withdraws from society to live alone on an island, a retired sea captain haunted by old superstitions, a herb gatherer keeping alive an old knowledge of homeopathic remedies. In the related "Dunnet Landing Stories," Jewett offers further glimpses of her fictional town, often delineating with unique sensitivity the theme of older people striving to live with dignity and security - Other stories include "A White Heron," about a girl's love for both a young ornithologist and the heron for which he is searching, the haunting "Miss Tempy's Watchers," and more tales, humorous, satiric, and poignant. This volume features a chronology of Jewett's life, useful explanatory notes, and an account of the textual history of each of the works included.… (more)

LibraryThing member laytonwoman3rd
The Country of the Pointed Firs:

The flavors, scents, sights and sounds of that most excellent of locales, the coast of Maine, drift out of the pages of this slim volume like magician's smoke. Spending a few hours in the company of Mrs. Todd, Mrs. Blackett and assorted denizens of Dennett Landing and Green Island is the next best thing to going there. The book reads like a memoir, the unnamed narrator giving us interconnected sketches of 19th century summer life in a simple time where everything is tied to the rhythm of the tides, and an herbalist's skill is respected at least as much as that of a "modern" doctor. Appropriately, there is humor of the most wicked variety, often aimed at the church and the clergy. My favorite line, however, was Mrs. Todd's observation about one of the hymn singers at a family gathering: "I couldn't help thinkin' if she was as far out o' town as she was out o' tune, she wouldn't get back in a day."
Review written July 2013… (more)