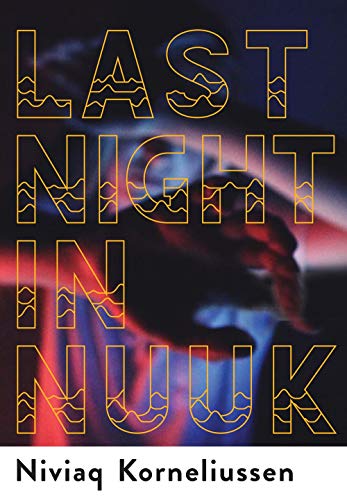 The highly acclaimed debut from an author profiled by theNew Yorker as her country's "unlikely literary star,"Last Night in Nuuk follows the lives of five young Greenlanders exploring their identities at the cusp of adulthood. Niviaq Korneliussen is a ground-breaking young writer hailed for creating "[her] own genre" (Politiken, Denmark) in her witty and fearless debutLast Night in Nuuk. A work of daring invention about young life in Greenland, Korneliussen brilliantly weaves together the coming of age of five young people in the capital city, Nuuk. Fia has recently sworn off sausage (men) only to discover that the woman she wants is unavailable. Arnaq struggles to cope with her past as her hard-partying life spirals out of control and she betrays those she loves most. Inuk, Fia's brother, is forced to escape Greenland after political scandal implicates him, and confronts the true meaning of home. Meanwhile, Ivik and Sara must confront an important transition in their relationship. In a collection of blurry nights and bleary mornings after, Korneliussen creates a Greenlandic literature unlike any we have known before--young, urbane, stream-of-consciousness, studded with textspeak and delirious with nightlife. With vibrant imagery and daring prose, Korneliussen writes unforgettably about finding yourself and growing into the person you were meant to be. A stunning debut from a brave new voice,Last Night in Nuuk is a dashing entrance onto the literary scene and establishes her as a voice that cannot be ignored.… (more)

LibraryThing member Othemts
I can't say I know enough about Greenland to have any misconceptions about Greenland, nevertheless I was surprised that this novel was set in an urban area. The city of Nuuk, Greenland's capital and largest city with 18,000 people, is described by one of the characters:
"Nuuk is big when there's somebody you actually want to bump into. People you don't want to see pop up all the time, but people you want to see are nowhere to be found." - p. 170
The novel is in five chapters, each from the perspective of a different young adult in Nuuk, focusing on that individual's experience as a queer person. They deal with issues such as the first-time feeling of same sex attraction, the shame and anger of a relationship with a Greenland politician going public, cheating, and recognizing transgender identity. The stories overlap as the characters know one another as siblings, housemates, and romantic partners. Each of the character's writes in a different style, which includes letters, journals, stream of conciousness, and even snippets of text messages. The names of the characters also tie into gender identity in the original Greenlandic, which this translation is good about making clear.

The author translated the book into Danish which is the source of this English translation. The book was originally titled Homo Sapienne and is also being published under the title Last Night in Nuuk. This book is a good glimpse into contemporary life in Greenland and is a great LGBTQ read for Pride Month, as well as being an excellent work of contemporary literature.… (more)
3 more
LibraryThing member danieljayfriedman
@Tommyjamesandtheshondells to score Last Night in Nuuk on screen??? #crimsonandclover #overandover

Niviaq Korneliussen’s Last Night in Nuuk isn’t your average LGBTQIA youth novel to burst out of Greenland. Nanortalik’s own Korneliussen provides an always fascinating, occasionally confusing polyvocal novel told through five apparently 20-somethings living in Nuuk. Korneliussen animates Fia, Inuk, Arnaq, Ivik, and Sara through their utterly believable and sometimes discomfiting first person voices. We hear their voices through stream of consciousness, emojis, texts, Facebook DMs, hashtags, and emails, all perfectly replicating today’s communication. Korneliussen convinces us of her characters’ struggles with romance, sexual identify, and navigation of day to day existence and friendship. The believability of the five voices in Last Night in Nuuk comes at a cost: even this reader—rarely squeamish when confronting fictional characters—might have preferred knowing less of, for example, the details of Arnaq’s hangover. And some of the voices—especially those of Fia, Inuk, and Ivik—sound most consistently distinct to me.

#NowIdonthardlyknowher and #ButIthinkIcouldloveher accurately describe Fia’s and Ivik’s emerging identities. Here’s Fia describing her frustrations with Peter, her roommate and lover: ”I give up and go into my room, log on to Facebook, would like to tag Peter and write: does anyone want this man who never grumbles and never glances at anybody else, I’m tired of my life, my back hurts because I always sit hunched over, he loves me so much that I want something evil to take possession of my body so that I can knife him, four years to prison, rehabilitation, a new life, maybe a more exciting life. . .” Here’s Fia again soon after: ”WHAT? My own thoughts frighten me. I don’t want to kiss her! What am I thinking of? I know my boundaries. My boundary stops here. Why the hell would I want to kiss a woman? Listen, you’re not into women! I tell myself.” And here’s Ivinnguaq recognizing herself as a man, Ivik: ”My sould finds solace in my body. Now that my body has finally found the answer, my soul is no longer in doubt. I was born again when I was twenty-three years old. I was born as Ivik.”

Last Night in Nuuk may appear to be a novel that can be read quickly, but this would do it a disservice. Niviaq Korneliussen gives us a lot to ponder and unpack, and her Last Night in Nuuk demands a thoughtful reading and rereading. It’s a novel that deserves to be widely reviewed and widely read, and to attract the same attention lavished on Normal People and Milkman and largely denied Olumide Popoola’s When We Speak of Nothing and Sjón’s Moonstone: The Boy Who Never Was.

I would like to thank Black Cat New York/Grove Atlantic and NetGalley for providing me with an e-copy in exchange for an honest review.… (more)
LibraryThing member chrisblocker
For me, this was a very "of the moment" novel. By that I just mean that it's tackling the subjects and using the vernacular you might expect of the era. I think this timeliness, mixed with the author's residence (Greenland), prompts a lot of praise. Despite this, I'm not convinced this is one that will stand the test of time (outside of Greenland).

There are some great tidbits of stories in here. The structure worked great. The reader is given five narratives, some of which overlap providing differing views of the same events. I particularly liked how a character easy to dislike at the beginning of the novel becomes the easiest to identify with in the end. But the whole thing feels a bit juvenile most of the time. There's a constant obsession with sex and alcohol, most of it comes off as very immature.

Last Night in Nuuk is a novel with some good moments drowning in adolescence and alcohol. It was a quick read, however, and it allowed me to scratch Greenland off my reading map.… (more)
LibraryThing member alanteder
Greenlandic twenty-somethings spiral out from Rashomon-like encounter
Review of the English language translation of "Homo Sapienne" by Anna Halager

This would be a 3 in my regular scoring, but it gets a bump to 4 just for the added frisson of being the first Greenlandic novel that I have ever read. And I just like the interconnectedness of having a single encounter being a pivot point for each of the 5 character stories here. That is what I mean by "Rashomon-like" in the header, i.e. the same encounter from several different points-of-view, not meaning that it is a murder/assault as in the film.

I also tagged this as "short stories as a novel" as the 5 characters here have their own 5 separate sections of the book to tell their tales about how they interact with the others. Mock screengrabs of texting as the equivalent of conversation was a neat modern day touch, but likely will date the book in the long run. Still overall I enjoyed this first novel from a young Greenlandic writer (24-years-old when this was first published in 2014). The ending is a bit of a deus ex machina in that an unrelated event is suddenly introduced into the mix in order to create a "happy ending."

Niviag Korneliussen had her breakthrough through the short story "San Francisco" (2012) which was published in "Inuusuttut - nunatsinni nunarsuarmilu" (Young in Greenland - Young in the World) (2013). The short story also has characters named Fia and Sara, who are the main leads of "Last Night in Nuuk," although the story has a more dreamy surreal plot with a different end result. You can read "San Francisco" in English translation here or in the Nordic anthology collection "Dark Blue Winter Overcoat and Other Stories."

Trivia Notes
Niviaq Korneliussen wrote this novel first in Greenlandic and also translated it herself into Danish. I am assuming that the English translation by Anna Halager was from the Danish edition although that isn't explicitly stated in my ARC copy.

Confusingly, the novel is being published under 2 different titles in its English translation, as "Crimson" in the UK and "Last Night in Nuuk" in North America. Most other translations just seem to go with the original "Homo Sapienne."… (more)
Fewer

Lanny : a novel by Max Porter
The Old Drift: A Novel by Namwali Serpell
When death takes something from you give it back : Carl's book by Naja Marie Aidt
My year of rest and relaxation by Ottessa Moshfegh